Some parts of NASA don't seem to be paying a lot of attention to what the President says, but it seems that the nuclear boffins at Marshall aren't in that camp. They have obediently changed the direction of their research from generating power for a base to nuclear-thermal propulsion, according to this report by Aviation Week. 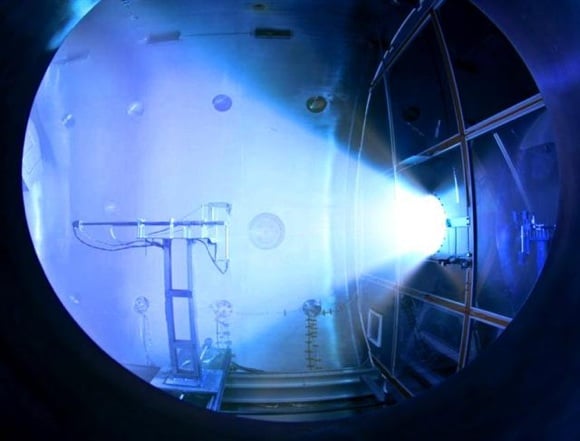 The Marshall team, according to Av Week, are not yet using actual nuclear materials in their experiments; rather they're using heaters to simulate these, and looking to build the rest of the rocket. The chosen reaction mass is hydrogen, which being a very light atom can be squirted out of a rocket very fast while still at a temperature low enough not to melt the nozzle.

“Because you can use hydrogen as a propellant, which has a very low molecular weight, a nuclear thermal rocket allows you to get a very high specific impulse even at reasonable material temperatures,” NASA engineer Dave Houts tells the magazine. “We should be able to able to achieve a 900-second specific impulse or better, so you’re roughly twice that of a chemical engine. We think we can go up from there using some of the advanced materials, advanced cycles and advanced geometries in the actual system.”

There are alternative space nuclear-propulsion strategies to thermal rockets. One such is the Variable Specific Impulse Magnetoplasma Rocket, brainchild of former Shuttle astronaut Franklin Chang Díaz. This works by shooting Argon or Krypton fuel out of its exhaust using electromagnetic fields rather than a physical nozzle. The tiny amounts of fuel can thus be blasted out unimaginably violently. Chang Díaz and his team, based on successful ground trials, believe they can deliver no less than 4800 seconds of specific impulse – provided their electric rocket can be furnished with a hefty 210 kilowatts of power.

There's only one spacecraft in existence with that sort of juice at its disposal: the 400-tonne International Space Station, which has the largest solar-panel array ever put into space. Even the ISS could never furnish 210 kW uninterruptedly – it needs power for other things – and its panels would yield less power at Mars, further out from the Sun. Solar-powered VASIMR ships might do for slow unmanned missions, but Chang Díaz says that powerful nuclear reactors would be needed for fast manned journeys. He calculates that nuclear VASIMR ships could reach Mars in as little as a month, as opposed to six months for a chemical-rocket job which would have to coast almost all the way unpowered to save fuel.

This approach would, of course, present its own problems. Nuclear reactors generally produce more heat than electric power, and an atomic VASIMR ship wouldn't be able to throw away its waste heat into cooling towers. Getting rid of heat from its reactor would probably be a major engineering challenge, as all the best cooling mechanisms would be useless in the vacuum of space. The NASA Marshall approach, though offering much less poke, would at least have the benefit that a lot of heat would be carried out of the reactor by the hydrogen reaction mass.

It is abundantly clear that the nuclear reactor technology required for such missions is not available today and major advances in reactor design and power conversion are needed. However, a number of serious research studies have been conducted that point to reactor and power conversion designs that meet the kg/kW required for such a mission. Again, much remains to be done, and closing the door on these possibilities on the basis of the relatively primitive state of our present nuclear space technology would be highly premature.

A flight-ready 200kW VASIMR is being built, and is tentatively scheduled for installation aboard the ISS in 2014. the idea would be to use it to maintain the station's orbital speed, which is continually being eroded by the tiny drag exerted on it by the upper reaches of Earth's atmosphere (an issue exacerbated, as it happens, by the station's huge solar panels). At present several tonnes of chemical fuel must be shipped up to the ISS every year for orbit-maintenance purposes, so the super-efficient VASIMR could pay its way very swiftly.

A private firm like Ad Astra can probably never muster the permissions and resources needed to make spacegoing reactors for use beyond Earth orbit, however, so those who'd like to see boots on Mars within a lifetime will probably be glad to hear that the US government is also looking seriously into atomic technology for use in space.

However there will also be those who look on any such move with fear. The Cassini mission to Saturn, which has provided so many excellent and exciting discoveries, has a radioisotopic power unit (simpler but much less powerful than a proper reactor). This was sufficient to cause quite a lot of protest when it was launched, with anti-nuclear fruitcakes dubbing the mission "sheer and utter madness". ®