'There's no way to be sure though'

US space agency NASA, in its self-appointed role as 2012 apocalypse denier to the world, has issued another statement regarding a terrifying catastrophe which in its opinion will not befall the Earth and the human race.

This time the possible planetary catastrophe is the menace posed by gigantic so-called "supervolcanoes", colossal eruptions thousands of times more powerful than any in recorded history which could cleanse entire continents of life. 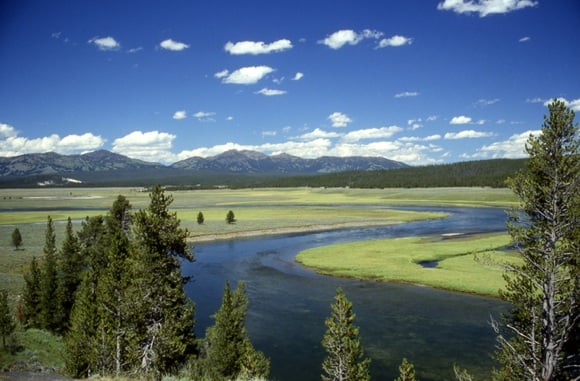 Basically that whole horizon blew up, melted and chucked itself into the stratosphere.

As usual we're indebted here to the knockabout press staff of the Goddard Space Flight Centre. They've put out their usual not-so-reassuring reassurance on supervolcanoes.

First up, super volcanoes are real, and have happened in the past with apocalyptic consequences.

Earth’s surface has preserved distinctive clues of many massive supereruptions. Expansive layers of ash blanket large portions of many continents. And huge hollowed-out calderas – craters that can be as big as 60 miles (100 km) across left when a volcano collapses after emptying its entire magma chamber at once – serve as visceral reminders of past supereruptions in Indonesia, New Zealand, the United States, and Chile.

The eruption of these prehistoric supervolcanoes has affected massive areas. The magma flow of Mount Toba in Sumutra, which erupted some 74,000 years ago in what was likely the largest eruption that has ever occurred, released a staggering 700 cubic miles (2,800 cubic km) of magma and left a thick layer of ash over all of South Asia. For comparison, the quantity of magma erupted from Indonesia’s Mount Krakatau in 1883, one of the largest eruptions in recorded history, was about 3 cubic miles (12 cubic km).

And make no mistake, something of this sort is pretty well bound to happen sooner or later:

Many millions of years could pass without a supereruption or many supervolcanoes could erupt in just a short period. The geological record does suggest supervolcanoes occur in clusters, but the clusters are not regular enough to serve as the basis for predictions of future eruptions.

What really seems to annoy the NASA spokespersons is all the 2012 hysteria. The message seems to be, yes, there are loads of genuine doomsday menaces out there but they probably won't happen in 2012 rather than some other year - no matter what the Mayan calendar long count has to say on the matter (which is essentially "start another long count", for those who wish to know).

However the space agency, in classic style, refuses to actually firmly say that there will not be a catastrophic mega-eruption next year.

Scientists have no way of predicting with perfect accuracy whether a supervolcano will occur in a given century, decade, or year – and that includes 2012. But they do keep close tabs on volcanically active areas around the world, and so far there’s absolutely no sign of a supereruption looming anytime soon.