The next version of Microsoft's Windows operating system will introduce changes that are designed to make automatic updates less disruptive by eliminating popup notifications and reducing the number of times machines must be restarted.

In a blog post published on Monday, Microsoft Program Manager for the Windows Update Group Faranza Rahman said the forthcoming Windows 8 will consolidate all restarts required in a single month and synchronize them with the regularly scheduled release on the second Tuesday of each month.

“This means that your PC will only restart when security updates are installed and require a restart,” she wrote. “With this improvement, it does not matter when updates that require restarts are released in a month, since these restarts will wait till the security release.”

Windows 8 will also eliminate popup windows and dialog boxes concerning pending restarts and instead display the notifications in the login screen. The notifications will give users three days to reboot the machine after installing and update. If the machine hasn't been shutdown or restarted by then and Windows Update doesn't detect any critical applications are running, it will automatically restart the machine.

In the event applications are running in the background or there is potentially unsaved work, users will see a message at login asking them to save their work, along with a warning that the machine will be restarted within 15 minutes. 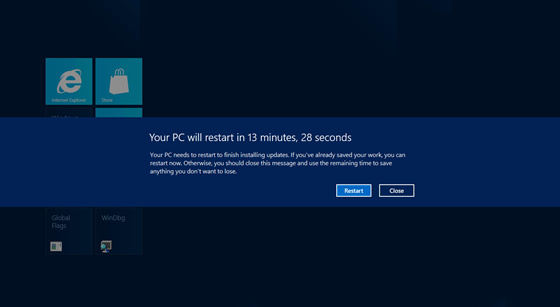 The Power options on the Windows lock screen will also change to offer choices to “Update and restart” and Update and shutdown” immediately after the update occurs.

Rahman said engineers arrived at the changes after analyzing the updating habits of millions of users. In one week, 90 percent of users who need an update have successfully completed the installation, including any restart. About 39 percent of Windows 7 users elect to have updates installed just prior to shutting down their systems, while another 30 percent allow the operating system to restart PCs as needed.

“Allowing restarts to occur without user interaction has helped us to rapidly update a major portion of the Windows ecosystem with critical updates,” she wrote. “On average, within a week of releasing a critical update, 90% of PCs have installed the update.”

The changes are likely to come as good news for users who want fewer interruptions as they use their PCs to watch movies, play games or work. The bad news is that there are no plans for Windows Update to install security patches required by third-party applications.

“The wide variety of delivery mechanisms, installation tools, and overall approaches to updates across the full breadth of applications makes it impossible to push all updates through this mechanism,” Rahman wrote. “As frustrating as this might be, it is also an important part of the ecosystem that we cannot just revisit for the installed base of software.” ®