Sailors drenched as bottles of piss emptied into wind

The US Navy's newest and mightiest nuclear aircraft carrier, the USS George H W Bush*, has been plagued by continual failures in its lavatories, according to reports. Sailors have been forced into increasingly desperate measures to relieve themselves. 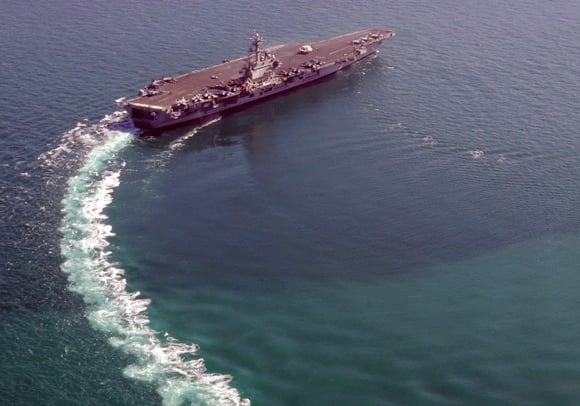 Well goddammit you guys, you shoulda gone before we set off

The Navy Times, following up initial stories of the problems appearing on blogs, quotes members of the 5,000-strong ship's complement as stating that at times there hasn't been a single working head – as lavs are known at sea – anywhere aboard the entire mighty hundred-thousand-ton warship. Reportedly the Bush is fitted with no less than 423 thrones, but it appears that problems with the suction flushing system can easily knock out large numbers of these at once – or even all of them.

According to the NT's unnamed sources, crewpersons aboard the carrier have struggled to cope with the situation. It seems that desperate sailors must often hunt for long periods to find a functioning head, and if they do discover one there may be a lengthy queue. Some of the unfortunate matelots have apparently resorted to urinating in sinks or showers, or in some cases off the towering sides of the ship (parts of it are as high above the waves as a 20-story building). The latter is a risky practice, however, as it is against regulations: at least one sailor has been put under punishment for doing so.

Other Bush crewmen have reportedly taken to the use of bottles in some private location, following which the containers are smuggled to a suitable point for surreptitious tipping overboard. Unfortunately this "can soil the side of the ship or the hangar deck, aircraft or fellow sailors, depending on how it catches the wind", the NT reports.

According to a statement supplied to the naval newspaper, there are breakdowns in the Bush's heads three or four times a day, though many of these only involve a few units and can be fixed relatively swiftly. Nonetheless the ship's engineering personnel have expended no less than 10,000 man-hours on fixing busted bogs during the carrier's current overseas deployment. It was admitted that one ship-wide breakdown required a 35-hour effort to fix, with the relevant technicians working flat out throughout with no rest.

Naval commanders blamed the problems on inappropriate objects such as clothes or feminine hygiene products being flushed down the heads.

The $6.2bn George Bush, when functioning on top line, is perhaps the most powerful warship in the world. Its air group of more than 90 planes and choppers could defeat many national air forces or navies on its own, and it can steam at a speedboat-like 30+ knots for 20 years without refuelling.

However it must be suspected that the mighty vessel's efficiency is somewhat degraded at the moment. ®

*41, not 43... Named not after the recent US president but his father, also president back in the early '90s, who saw combat as a carrier aviator in World War II.