Can we elect a new population?

Analysis Talk about an inconvenient fact. A survey into US attitudes to internet piracy shows strong public support for blocking access to websites guilty of serial copyright infringement. No fewer than 58 per cent support the idea of ISPs blocking the pirate sites, and 36 per cent disagree with this. Of the respondents, 61 per cent want sites like Facebook to take more action to screen for infringing material.

This may not be what the corporate sponsor Google, which benefits from internet piracy and fights enforcement proposals, had in mind when it funded the research. Google is currently leading the opposition to the new SOPA legislation in the US, which obliges service providers to take greater responsibility.

Perhaps, as in Brecht's poem, Google wishes "to dissolve the people and elect another", until they get the answer they want. In fact, that seems to be exactly what happened here.

Columbia University, who Google funded to conduct the survey, has a very hard time spinning it favourably for their corporate paymasters. They resort to the old trick of rephrasing the question until it got the desired answer. (Statisticians sometimes do something similar: it's called "torturing the numbers until they confess.")

Asked if websites should be "censored", 46 per cent said yes, and 49 per cent said no. Fewer agreed if the question was posed in a way that implied legal content was being accidentally blocked. And asked if "the government" should "censor" websites, the number fell still further, with 36 per cent in favour and 64 per cent disagreeing.

The researchers stopped short of asking whether the public approved of the government unlawfully kidnapping their children while they censored websites and burned the Holy Bible just for fun, which is a pity. But you get the general idea. The answer depends on the question.

Two UK surveys have both shown strong public support for stronger law enforcement for online infringement. Even pirates agreed with the proposition that they were doing something a bit iffy, and would stop.

Which brings us to what wasn't asked in the survey. There are some serious omissions.

In the UK, a mere 11 per cent disagreed with the statement that: "It is important to protect the creative industries from piracy." But remember this new study is Google-funded research; they don't want vital context like that spoiling the numbers. The same UK survey also showed that whacking free-riders is popular; 51 per cent polled in the UK thought serial copyright leechers should be punished more strongly, including many "pirates". That question wasn't asked by Columbia, either.

The survey instead asked if people had ever committed online copyright infringement, and the answer tells us something we already know: many people have, and the number rises among under-30s. It doesn't ask if this is a regular occurrence, and how much is casual and how much is "hardcore". The survey does ask how much of people's personal collection is pirated, but what would be more useful is a "flow rate" (like the GDP measure), not the accretion, so we haven't really learned anything about habits or behaviour. 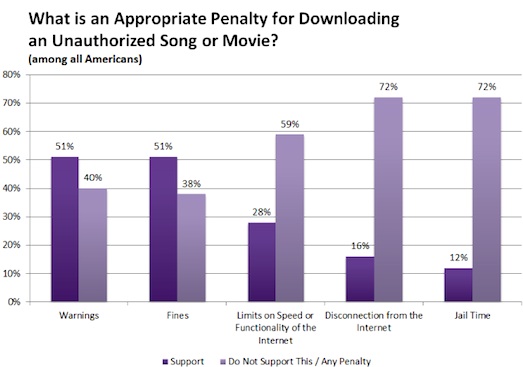 Early data from France suggests most people stop pirating after just one letter, the number of people who have received two is tiny. Spending money on recorded music is now optional, and the copyright industries hope that people who love music go back to buying more, rather than spending the "saved" cash on beer and other entertainment, as they are free to do now. This is the justification for the legislation. (Which is clumsy stuff, as your reporter never ceases to point out; there are other ways of discouraging anti-social behaviour than blocking sites).

No industry research into piracy is ever believed by opponents of digital copyright enforcement, the so-called "copyfighters". This is for two reasons: studies have in the past have notoriously exaggerated the economic impacts of piracy for tactical reasons. Much like alarmist Greens, copyright groups want the threat to be seen as exceptional, requiring exceptional action. But secondly, pirates don't want to acknowledge that piracy does anyone any harm – so they block their ears.

"What's that you say? Never paying for anything hurts the creator? That can't be true. And oh, I can't hear yoooou!" ®

HavanaCrypt ransomware sails in as a fake Google update

Difficult to detect, hiding its window by using the ShowWindow function in Windows
Security11 Jul 2022 | 5

DeepMind AI reacts to the physically impossible like a human infant