Why have VCs hosed down an obscure startup with cash?

Our man ponders on the secret that has money men drooling

Lookout provides mobile phone protection and management services in a friendly Mozy pre-EMC kind of way, kind of like a helpful uncle, but its revenue potential seems to be making VCs salivate.

Look at this funding history:

See how the funding pace accelerated in 2010 and then, this year, $40m came in? What is all this money for, all $76.5m of it? It's a huge amount and this is a software company, not a hardware development company. Certainly it has staff to pay - app security status curators for example - and is building global sales, marketing and partnership infrastructure, with local language European product and partners. That takes a chunk of change, and another big money pot is building out its data centre operation, but $76.5m is still huge sum. What is going on?

Something changed between December 2010 and September this year, something that prompted VC backers to pour in another $40m, almost as much as all the previous funding combined, something that could have been triggered by some business performance benchmark being reached.

But it was something that saw enormous revenue potential in reach, some big, big numbers. What could that be?

Lookout has 12 million customers, with Android as its code platform and likely to remain so. Some proportion of its customers convert to paid-for premium services but Lookout won't say what the conversion rate is. Still we can make a relatively informed guess as the company isn't yet profitable or profitable enough to pay for its build-out without taking $40m VC cash.

So revenues are not $40m. What might they be? Surely high enough to get the VC backers excited. Lets try a 1 per cent conversion rate and $30/year income per paying customer. It's adding, it says a million new customers a year. 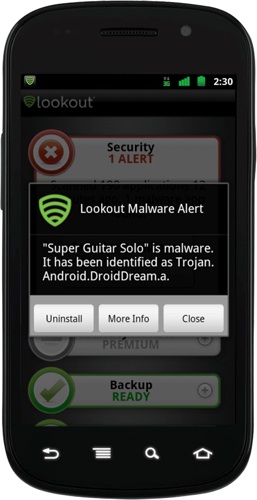 If Lookout can offer more paid-for services, such as cloud backup priced by data amount, and/or increase the conversion rate, then we have a money-generating machine here. Our numbers are crude and our calculations simple but, even so, we can begin to see that Lookout could be a cloud ATM for its backers, pouring out a river of cash.

Conversion rate and average revenues per customer will be key, as will retaining the ethos of the founders and their product. If they can pull this off, then Lookout could become a greenback gusher in the cloud. ®