Pentagon boffinry powerhouse DARPA has announced plans to fit a giant new US military command and control airship - known as "Blue Devil Block 2" - with through-the-air optical links offering bandwidth normally achievable only by fibre cables. This is to be done using newly-applied technology developed in the 1990s for use in astronomical telescopes. 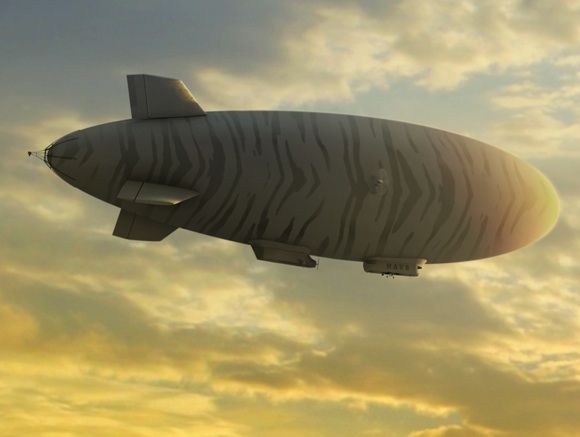 Soon to be doing 'God's work' alongside Blue Devil Block 1 (see Bootnote below.)

We learn from a federal no-competitive-tender announcement issued last week that the Blue Devil airship under development by military intelligence contractor MAV6 is to be fitted with "up to two Free-space Optical Experimental Network Experiment (FOENEX)" systems.

FOENEX is a system which uses line-of-sight lasers to communicate between aircraft and ground stations, which on the face of it is nothing new. However FOENEX achieves much, much better reception and transmission fidelity, almost as good as if the laser light were travelling along an optical fibre rather than through miles of turbulent air and clouds: so good that single photons can be picked up, potentially allowing for through-the-air quantum cryptography, if desired, as well as massively increased bandwidth in normal fibre style.

FOENEX achieves this by using adaptive-optics technology, a trick originally developed in the 1990s for use in high-powered astronomical telescopes to eliminate distortions caused by viewing through the Earth's atmosphere. Adaptive-optic telescope mirrors measure distortion of an incoming photon stream very fast and use piezoelectric actuators to warp the shape of the mirror to tolerances of one fifty-thousandth of a millimetre every millisecond. This lets the mirror produce an image approaching theoretical perfect performance - the sort of performance you need to start dealing in in single quanta/photons, the sort of performance you normally need fibres for. The Reg has previously reported on the project which developed FOENEX, under the auspices of US air force lab boffins.

The Blue Devil Block 2 is perhaps an ideal candidate for deployment of the fibreless optical pipes into the field, as it is intended to handle enormous amounts of information. It's billed as a "C4ISR aerial fusion node", C4ISR standing for "Command, Control, Computers, Communication, Intelligence, Surveillance and Reconnaissance" - the latest in a long strong of military acronyms which long ago replaced the simple phrase Command and Control. Like many modern-day airship projects it's intended to exploit a dirigible's long endurance by using the ship to sweep large areas of ground with high-resolution sensors including man-tracker radar and infrared video surveillance: but even more than this the Blue Devil is expected to act as an airborne command and communications netywork hub tying together a fleet of Reaper drones and other aircraft all deploying so-called "wide-angle" spy payloads, which look at many places at once (so minimising the so-called "drinking straw" problem where ordinary single-lens optics can look at only a small area in any detail.

For those who might be more interested in the ship than the payload, the Blue Devil is no less than 370 feet long (ie roughly of a size to fill up the interior of the Notre Dame cathedral in Paris) and boasts diesel-electric propulsion for flights lasting up to 9 days at altitudes of 20,000 feet - and furnishing up to 96 kilowatts of power for the payload hardware. It's a simple blimp in construction, using internal envelope pressure rather than any rigid structure to maintain its shape - though it's very large for a blimp, with volume of just over 1.3 million cubic feet, almost seven times as much as today's Goodyear ships. (The largest non-rigids ever built were the US Navy's 1950s ZPG-3Ws, which carried a large distant early warning radar inside their envelopes, at 1.5 million feet3). The ship, as opposed to the more-expensive payload, is provided by TCOM of North Carolina.