Part 2 A few years ago I suddenly saw my energy bills as another performance metric that I could tweak just like optimising Lehman Brothers' derivatives calculations that I was nominally paid squillions to do.

In fact, this whole area is full of numbers and graphs and science and gadgets and interesting techie puzzles, never mind the grand+ per year that I'm saving on my energy bills or indeed that "hippy commie yoghurt-knitting greenie" conspiracy about cutting carbon footprint to help avert global warming.

From aerogel and LEDs to iButtons and thermal imaging, you should see some of the fun I've been having!

And by the way, my home and office electricity bill is about GBP120 per year on a premium all-green tariff and gas about GBP360 per year, for me and my young family, and I may be able to continue to cut waste faster than energy rates rise, so my bills could keep falling.

As previously reported in El Reg, I replaced a whole rack of Solaris servers for my home office and internet presence with a single low-power Linux SheevaPlug that runs off-grid on solar power and wrapped my living room in space tech to keep it warm and snug in winter, but less glamourously I've also topped up my loft insulation several times to make sure that I've kept ahead of steadily-advancing Building Regulations (Part L in particular) and whenever we've had an appliance or gadget fail beyond repair we've bought the most energy-efficient replacement that we could (A+ fridge/freezer, and LED-backlit-screen laptop, all CFL and LED lighting, for example), blocked draughts, put up a door curtain, and re-hung an internal door. All the while measuring our consumption against heating degree days to see how much good my performance tuning was doing.

(We have made supporting behaviour changes too such as putting thermostatic radiator valves (TRVs) in and not heating rooms that we're not in, washing clothes at 30C or cold for most washes, and almost never using the tumble-drier at all, along with turning things off when we're not using them. For example, we were spending the equivalent of about a fiver per year running the clock on our microwave oven until we put it and the toaster on a powerstrip to turn off at the wall for all but a few minutes per day!)

We now have a roof covered in solar PV; ordinarily if saving money on bills is the primary goal then PV should be a long way down the list after insulation, draught-proofing, conservation (eg turning things off when not needed), and more insulation.

But then I'm a geek and have always loved the idea of generating enough energy to power a whole house. In fact, even on our small roof we currently generate twice as much electricity as we use and that takes us net zero-carbon after allowing for our gas consumption. In fact, when I get round to swapping our band-D gas combi boiler for an air-source heat-pump I expect our electricity generation and consumption to just about balance over the course of a year. 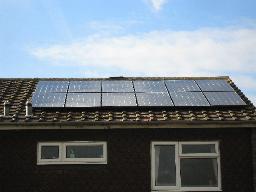 Solar PV on our roof

A handy side-effect of the solar PV, though not the reason I did it and I do not get the full FiT income for various reasons, is that as well as being carbon neutral we are roughly money-neutral on energy too.

As well as the solar on the roof pumping electricity into the GB grid, I also have a few panels in the garden to power my SheevaPlug as mentioned above.

And the next phase of my madness is to try to squeeze in some PV/T panels to give us a dribble more of electricity, but also about half our hot water for the year, thus saving little more gas, maybe somewhat over 10 per cent of the total and another 100kg or so of CO2 per year avoided.

Next page: Does it work?
Page:

Something for the Weekend Hello customer, can I help you? Ha ha, just kidding, of course I won’t
Software12 Aug 2022 | 15