Taking the fight to Fibre Channel

No VC is going to fund a start-up intent on attacking EMC's SAN array heartland with a disk drive array - who would be that foolish - but a flash array which outperforms VMAX/VNX and costs less? Now you're talking - if it's for real.

Pure Storage is confident that it has the technology to beat EMC, Dell, HDS, HP, IBM and NetApp Fibre Channel SAN arrays. We've described the technology previously, but to recap, it's an all-flash array with thin-provisioning, compression and deduplication to enable its cost/GB to be lower than SAN disk arrays.

Product VP Matt Kixmoeller said at a press briefing: "We saw a lot of flash start-ups over the past couple of years - but they were blinded by performance. We thought the biggest obstacle was economics."

It's not sufficient to have the technology and the economics alone though; credibility is key when you're selling mission-critical arrays to enterprises used to dealing with rock solid suppliers like EMC and the like. Pure is pursuing that by conducting very open and lengthy alpha and beta testing.

Kixmoeller said: "We're certifying beta release runs on four platforms and variants. We've spent millions on interoperability testing." There are some 40 companies beta testing Pure's product, which could ship in the second quarter next year, and testing started one-and-a-half years ago.

Pure is even publishing case studies of some beta testers, such as eMeter. This is generally unheard of in the industry.

Our feeling is that Pure will probably bring out TPC benchmarks; another credibility booster.

Pure is developing extremely clever software to drive its off-the-shelf consumer-class multi-level cell (MLC) flash to both perform fast and dependably, and have a robust working life. It's carrying out extensive profiling of Samsung NAND drives, working closely with Samsung, and investor and the main one of its two flash suppliers, the other being STEC with a customised ZeusIOPS card. 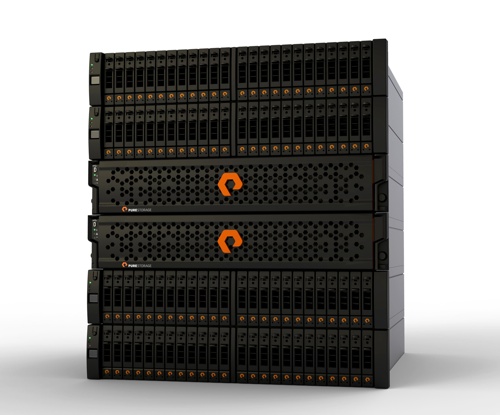 It is tuning its software so that it manages its writes to the drive to reduce write amplification and avoid brief period when a drive can't write through internal activity, switching writes to other drives and then back again. Technology director Michael Cornwell said: "We have 1 per cent over-provisioning. Our write pattern means the drive never has to do internal garbage collection ... We run garbage collection globally over the entire array ... It's all about reducing latency. Every millisecond/microsecond is sacred to applications."

Pure seems to be a reprise of 3PAR in its approach: going for the Fibre Channel SAN jugular. It is going to say to EMC customers: "Don't buy a VMAX or VNX. Buy one of our arrays and get better than EMC performance for less money but the same enterprise-class reliability, availability, service and support". It knows it has to have a compelling proposition to prise customers away from the comfort blankets provided by HDS, HP, IBM and the other top SAN storage array providers.

Next page: Price and positioning
Page:

Manufacturers allegedly told to connect to NavIC by 2023, which did not make them happy at all
Personal Tech28 Sep 2022 | 3