Huge PDP-11 in a lorry: How I drove computers into schools

Tiring work - and that was just opening it up

The director wanted us to practice deploying the trailer, before the computer was installed. So occasionally we would visit the empty trailer, standing out in a snowy field in the freezing cold, open the wings to expand the room. Then we'd fold it back up. The wings expanded with a manual crank. It took considerable strength to turn the crank, none of us could work for more than a minute or so. It was exhausting.

The floors folded up and were retracted by an electric winch. The director wanted to show us that the winch had no automatic shutoff, so we had to be careful to manually stop it or it would snap the cable. I was watching from outside, underneath the floor, so I could see how this worked. Of course the director snapped the cable, dropping the heavy floor right over my head. A moment before, I was standing in the open floor area. I could have been killed.

In the spring (several months late) the PDP-11 arrived and was installed in the trailer. The minicomputer was installed by DEC engineers; they couldn't believe what they saw. The trailer was hooked up directly to an electric power pole, and grounded by a big copper stake hammered into the earth.

The power was too unstable to run a sensitive computer and engineers from the local power company had to come to fix it. Power grids in Iowa were notorious for voltage fluctuations; a typical 120V AC line could be anywhere from 100V to 130V. The 60Hz AC cycle could vary, disrupting the system clock. 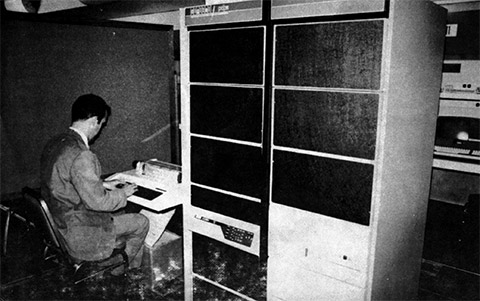 The computer finally became operational and more equipment was delivered. The PDP-11 occupied two full server racks, and had a removable disk pack so the delicate media could be dismounted during transport.

We received two terminals to join our DECWriter system console. I began working in the trailer, preparing the system for its first live test. I asked the Director when the other 14 terminals would arrive. He said this was it. The project had run over budget, now they didn't have enough money to buy more terminals.

I was scheduled to help deliver the trailer for its first run, but I could leave that to others. The director planned to make a big splash, delivering the high-tech truck to a small rural town. It would spend a week there and then move to another town every week. I visited the site during deployment. The electricians spent 3 days stabilising the power source. Now there were only two weekdays to finish the courses, and only two teachers could use it simultaneously.

After all this work to create and transport an enormous truck full of 16 terminals, and only deploying two, it seemed like we were transporting a huge room around with almost nothing in it. I had worked for nearly a year, to deliver almost nothing. My software job was done, so I moved on to another project. I never heard of the Mobile Instructional Classroom again.

New developments in microcomputers like the Apple II revolutionised educational computing overnight. The ambitious mobile classroom project was obsolete before it was even launched. But for a brief moment, it tried to raise the standard for computing in the classroom, at the same moment a new standard emerged. ®