A British researcher who studied elephants' fear of being stung by bees has been given a gong for developing a fence of beehives to reduce clashes between humans and the mighty mammals.

Dr Lucy King's invention stops the giant animals from wandering onto farm land and causing havoc because they are so terrified of swarms of the tiny insects.

The biologist - who carried out her work in Kenya - was presented the international research prize of the Convention on the Conservation of Migratory Species of Wild Animals at a United Nations ceremony in Bergen, Norway yesterday.

"I congratulate Dr King as the winner of this important award. Her research underlines how working with, rather than against, nature can provide humanity with many of the solutions to the challenges countries and communities face," said UN Under-Secretary General and UNEP (UN Environment Programme) executive director Achim Steiner.

"Dr King's work spotlights an intelligent solution to an age-old challenge while providing further confirmation of the importance of bees to people and a really clever way of conserving the world's largest land animal for current and future generations." 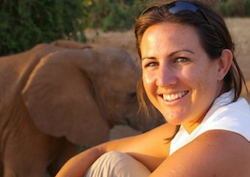 "By reducing conflicts between people and elephants, Dr Lucy King has designed a constructive solution that considers the needs of migratory animals but also the economic benefits to the local communities linked to species conservation," said Convetion on Migratory Species executive secretary Elizabeth Maruma Mrema.

King's research zeroed in on the African Savannah elephant's terrified response to tiny honey bees. In 2002 it was noted that African honeybees were a deterrent to elephants because the mammals refused to feed on acacia trees hosting beehives for fear of being stung.

That experiment, which used the digital playback of bee sounds, revealed that elephants would alert their fellow four-legged stomping friends about a possible attack, which often meant they would wander onto a farmer's land.

King developed the beehive fence as a device to prevent migrating elephants from entering agricultural areas.

She undertook a two-year pilot project that started in 2008 and involved testing her beehive fence method on 17 farms in Kenya. The researcher also covered 17 other farms with traditional thorn bush barriers.

"Elephants pushing against the wire connecting the different beehives would shake them unpredictably and disturb the bees. The beehive fences were built with one beehive every 10 meters and an elephant attempting to enter a farm would instinctively try to bypass the beehives," the UNEP said.

King concluded from her study that such crop-damaging raids on agricultural land could be greatly reduced for farmers who adopted her beehive fence creation. ®