The Golden Age of Computer Sales surely must have been Christmas 1984. The Macintosh had just been released, Compaq and IBM offered powerful new CPUs, but the real action was a massive Christmas sales battle between the Apple//c and the IBM PCjr. I remember it well, I was working at ComputerLand in Los Angeles, and I was at the very center of the battle.

The '84 Christmas season would be an inversion of our usual high-end sales efforts. Professional computers from IBM and Compaq were too expensive for the seasonal retail market, and the Macintosh was too new and little software was available. ComputerLand was always intensely busy in December, handling christmas shoppers as well as large corporate customers who had to spend their budgets before December 31. Amidst all this flurry of year-end sales activity, Apple and IBM decided to fight it out in the low end consumer market. The Apple//c was a pretty darn good computer. It was inexpensive, with nice peripherals including a mouse, which had just made its debut on the Macintosh. The //c and the Mac casings were produced by Frog Design, so consumers got some of the cachet of the Mac even if they could only afford a //c.

IBM's competition was a notorious flop, the PCjr. It had just been revamped, the "chiclet" keyboard was replaced with a better model. An inexpensive (but blurry) color monitor was standard. Microsoft produced a "sidecar" with extra memory and its own mouse, and bundled it with primitive apps like PCPaint and PFS:Write. Some of the PCjr's programs came on ROM cartridges since there was only 1 floppy disk drive, with no room for both programs and data. Naturally, the Apple//c outsold the PCjr, by about 10 to 1.

Despite IBM's renewed sales push, the PCjr was dying. It was made specifically with the intention of eroding Apple's lucrative consumer market. IBM desperately wanted to damage Apple by killing their lucrative Apple II cash cow, at a time when investment in the new Macintosh was a heavy drain on Apple's financial resources (and let's not even mention the Lisa debacle).

Apple did one really brilliant thing. They worked with Frog Design and their ad agency Chiat Day to produce a most excellent point-of-sale retail experience, foreshadowing today's Apple Stores. And my store in Studio City was a showpiece. Apple produced glossy 4-color packaging for the //c, which had all the sales information written right on the box. We received dozens of empty boxes and we folded them all up and it looked like we had hundreds of computers on display, it reminded me of Andy Warhol's Brillo box sculptures. Apple claimed that all you had to do to sell the //c was put one of the dummy boxes in the customer's hand, get them to a demo station, or do anything to get them to touch the product, and they'd fall all over themselves to hand you money.

Even better for us salesmen, ComputerLand pulled a trick unheard of in the LA computer market: we negotiated a mass purchase deal so our cost for the //c was $100 lower than any other store in town. We sold the //c at a price $1 less than other dealers' wholesale cost, we had a lock on the //c market because our competitors had to sell at a loss to match our prices.

But the ComputerLand salesmen wouldn't go for it, they thought the //c was a huge waste of time. The profit on a //c was only $99 and the sales commission was $8, and nobody wanted to waste time with a sale that would net you $8 when the phone was also ringing off the hook with year-end corporate customers making hundreds of thousands of dollars of year-end purchases. But our store figured out a way to juggle things, and Apple sweetened the deal for the salesmen with "spiffs."

Spiffs are Sales Person Incentive Forms, but there are many backronyms. For every Apple you sold, you filled out a form and got a bonus. Suddenly everyone got interested in the //c. Apple had no idea we could sell so many computers. The top prize was a //c computer plus a cash bonus, Apple expected a few salesmen would reach the goal by late December, but I had already won the top prize twice over by the end of the first week of December. During the busiest store hours, sometimes a dozen customers would be stacked up at the register, listening to us explain the features of the computer as we wrote up the sales receipts as fast as our pens would write. And Apple forced a time-consuming duty on us, we had to get the customers to fill out the warranty forms and give us a copy for our spiffs. Customers were hesitant to fill out the forms if the machines were purchased as gifts, it was a real problem to get them to do it. But we persisted because that was how we got paid. 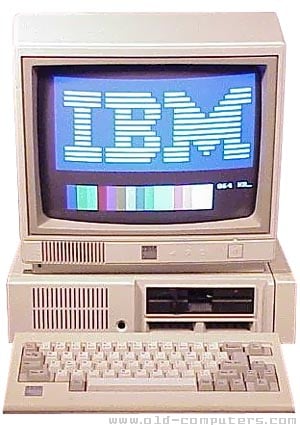 You really don't want a Macintosh. Or a iic.
You want one of these.