Fire up the DeLorean and grab the almanac, time travel is here... or maybe not.

Atom-smashers at CERN's subterranean Alpine lab seized the headlines recently when they found a set of subatomic particles once obscure outside the world of boffinry had turned scientific convention on its head by travelling faster than light.

Albert Einstein concluded in 1905 that no object can be accelerated to the speed of light; his assertion underpins the theory of space-time, and of relativity. It cemented our understanding of cause and effect, and dictates that when throwing a brick through a window you see the movement of the brick through the air and towards the window before the window shatters – not vice-versa.

But what we really want is Back to the Future-sorta stuff: being able to see the result of a football match before placing your bet or witness some key share price movement before a stock pick.

Professor Brian Cox, BBC universe front man and mop-haired CERN ATLAS physicist, bursts our bubble. "It doesn't mean I can build a new time machine to shine into the past and tell myself the share price performance of today," he says of the neutrino findings. Damn. 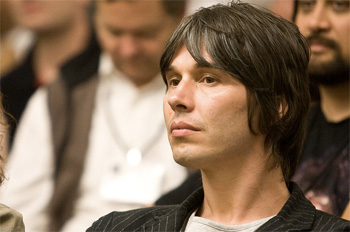 Cox: the answer comes from within, not from Twitter

Nevertheless, speaking at The Register and Intel's Live 2011 event in London this week, he made it clear the results have big and profound implications, and physicists are struggling to explain the results and find out if something has been missed in the calculations. They are going so far as to ask whether the effect of something as basic as the Earth's gravitational field on readings might have been misunderstood.

"It's a big effect," he said of the neutrino findings. "It's not a small effect. There's something subtle – it's not something obvious you see on Twitter. 'Have they thought of this?'. Well yes they have. It's very complicated, but nobody for the life them can see what the problem is," Cox said.

If the neutrino results stand, then it means a fundamental re-writing of the basic geometry based on Einstein's work and used by physicists to put cause and effect – and past and future – in their proper places.

Cox reckons physicists had suspected a rewrite might be on the cards at some point, but this is a surprise. It was believed a rethink would be needed for situations involving much higher levels of energy: the levels found at the formation of the universe with the Big Bang 14 billion years ago, far above the levels of CERN and way above neutrino levels.

Neutrinos exist in everyday life – we just don't feel them hitting us. You would certainly feel the levels of energy produced by CERN's Large Hadron Collider: at full power, it generates 2 x 7 teraelectron volts or 2.2 x 10-6 Joules; LHC produces so much energy when atoms are colliding it's radioactive and dangerous to humans. The Big Bang is calculated to be, er, bigger.

The speed of light underpins space-time, and anything that goes faster than light undermines our understanding of the universe. Space-time, according to Einsteinian thinking, puts what we perceive as 3D space on a flat plane along with time to calculate the way we observe events. "Einstein is built into the geometry of space-time – it is the thing that protects cause and effect," Cox said.

If Einstein is wrong and speed of light is slower than something else, in this case neutrinos: "It would mean you just have to modify a new structure of time to protect cause and effect."

The enormity of the results, and a rewrite of the geometry of Einsteinian thought and modern physics, is one thing that's making boffins very suspicious of the neutrino results, and another reason why you shouldn't break out the DeLorean just yet. Fellow scientists in November claimed to have disputed the faster-than-light Neutrino findings – after the CERN OPERA physicists that produced the results had themselves run them again just to make sure.

Another reason there is doubt comes from past observation of supernovae. Ninety-nine percent of the energy in a dying star is emitted by neutrinos, but it is light that has reached the observers on Earth first, not neutrinos. "Many people think the data will be wrong because you'd expect to see a bigger effect in the supernova data that you don't see," Cox said.

Light-beaters or not, neutrinos will remain a problem in general that physicists are working hard to unravel. "We have a problem with neutrinos anyway," the Manchester University man said. "We don't understand their masses or how they behave."

For Cox, however, the whole neutrinos debate is part of the process of establishing new ground in physics and our understanding of the universe.

"It's a beautiful example of how you do science," Cox said. "The collaboration of serious people at CERN who've proved published their results and it's gone to peer review. I can see the headlines now if it's shown to be a measurement error, it will be: 'Look at these idiots'. But that's not the point. This is how science proceeds."

Best to keep the DeLorean just ticking over for now. ®