Joyent, which has no relationship to Sun veteran Bill Joy whatsoever, broadly offers cloud computer and storage services – like Amazon – but with service level agreements so that customers can get reliable and dependable services.

Steve Tuck, the general manager of Joyent's public cloud, spoke at a press briefing in Joyent's San Francisco headquarter's last week, where he said: "You can expect an object store service that will be able to support petabytes and petabytes of storage very soon."

We take that to mean either the first quarter of next year or even, possibly, before the end of this year. 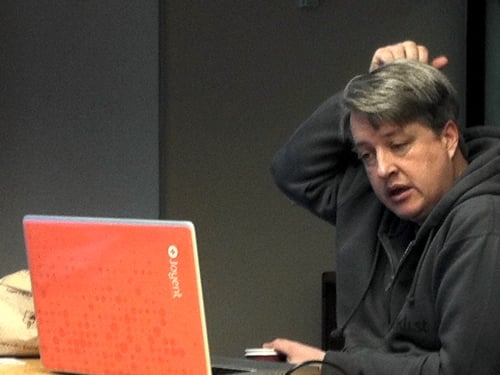 The Joyent cloud already uses the Sun-developed ZFS filesystem. Tuck said: "A key Joyent component is reliability, [based on] a full copy-on-write file system – ZFS ... the only one in the cloud. An application doesn't lose data and data comes back consistent after any crash."

Object storage treats file storage differently from traditional file:folder systems based on a file's name and its place in a folder. A file is stored as an object, a single entity formed from the file data together with its metadata, and given a unique identifier often created from the file data contents via some kind of hashing system.

There is a single flat address space with multiple nodes co-operating in a cluster or ring-like structure, with each node storing a part of the overall set of objects and some technology for locating, reading and writing, and managing objects in this structure.

Object storage proponents say the technology can scale beyond filesystems, won't become bottlenecked – as filesystems are said to do when the number of files goes well past the billion mark – and is cheaper in storage hardware, software and managability terms than tradition filers.

Up until now, object storage has largely been used for the fixed content side of generally unstructured data, where access rates tend to be low and skewed in favour of reads. Object storage has also mostly come from a set number of suppliers, which include Amplidata, Bycast (bought by NetApp), EMC (Centera and Atmos), Caringo, DataDirect (Web Object Scaler), Dell (DX6000 using Caringo CAStor software), Hitachi Data Systems (HCAP, etc) and Scality.

A downside is that traditional filer access protocols, such as NFS and CIFS, can't generally be used for object storage. HDS gets over this by having an HDI (Hitachi Data Ingester) front-end appliance which does talk the language of files to its users.

We are beset with assertions that unstructured data growth is rocketing skywards, so much so that the term Big Data is often used to describe it. The object storage vendors are taking heart from this and hope that it will become more popular. By basing it in the cloud, object storage access could become easier and cloud storage service vendors – exposed to the scalability advantage arguments of the object vendors – could and should be an easier sell than customers who currently store terabytes of data (and are moving relatively slowly into the petabyte and tens of petabytes area).

Joyent certainly believes there is a place for object storage services in its offering. Amplidata, Scality, Caringo and the other suppliers are also looking enthusiastically at the cloud. EMC has launched the Atmos Cloud Delivery Platform, packaged as a VMware vApp, and is using Atmos as its core storage platform. It is a turnkey Storage-as-a-Service offering with which cloud service vendors can brand themselves, and the vendor claims it is fully functional in minutes with merely a few mouse clicks.

Cloud object storage should hide object storage complexities from users and be bought by users who fervently believe in scale – and are thus open to filesystem scalability limitation arguments. It will be a great object storage testbed. ®