Windows, Linux, what works best for the studios?

During the film's creation the artists need to send off the sequences they're working on for rendering to check their results. It's typically an overnight process, like the old days of "daily rushes". The ideal would be instantaneous on-site rendering, but Granard explains: "We're generating so much visual complexity that we're still not at a point where we can get every single artist the sort of horsepower they need to do everything interactively."

The sequences are built up in layers: first outline sketches, then the creation in software of wireframe sculptures called "armatures". Once these armatures have defined the basic motions of the characters their surfaces are textured. They're then used to create a rough layout, or "animatic" around which camera movement can be set up. Many layers of refinement follow, matching the action and lip movement to the prerecorded voice track, blocking out the way the character moves through the sequence, and adding the subtle touches that bring the character to life.

Jim Mooney admires the scale of bigger shops like Framestore and giants like Dreamworks Animation. His more modest Render Nation runs on 120 servers.

"The packages we support are the ones more appealing to freelancers rather than large studios," says Mooney. "Most of the incoming material we process here is done in 3DS Max."

It's another Autodesk product with a long history that grew up through the Microsoft ecosystem from the early days of DOS. He adds: "All our machines are running the 64-bit versions of the various Windows operating systems."

Mooney says that for a shop his size, Windows is relatively cheap and easy to maintain. Framestore's chief engineer Andy Howard has gone a different route: "If we'd had to do all this on Windows, we couldn't afford the licences. We just couldn't make any money – we'd have had to shut down ages ago."

Framestore runs almost exclusively on Linux, supplemented by a handful of Macs. Both operating systems are essentially Unix, which Howard finds helps a lot with maintenance. As Howard tells it: "Back in the late '90s the whole movie industry did the same calculations we did. If we're going to have to buy a new Windows licence for each workstation every year and a half, and we've got 500 operators - do the maths."

But it's not just about the licensing. "Linux is absolutely revolutionary," says Howard. "And the great advantage is that it's open. It allows you to script things, compile programs for it, which is where the individual facility companies get their edge. They write their own shaders, or fur programs or whatever, and compile and run them on Linux."

Dreamworks Animation took the same view when it was spun off from DreamWorks SKG in 2000. "We're primarily a Red Hat Linux shop," says Ryan Granard. "That was a decision our CTO Ed Leonard made years ago. As a high-performance computing shop we have a lot of fairly stringent requirements, and Linux has really held up extremely well for us."

Back in the mid-90s Microsoft had attempted to take over the 3D animation market with its purchase of the Canadian Softimage corporation, whose software had been used by Industrial Light & Magic to create the dinosaurs in the Oscar-winning Jurassic Park. But while Microsoft was porting the product to Windows NT, Disney released Toy Story, the first feature length computer animated film. 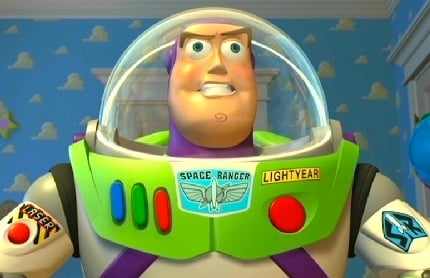 Buzz was rendered on Pixar's own software

Toy Story was something quite new to Hollywood, and the technology behind it was totally disruptive. Developed by Pixar, a once-failed video hardware vendor revived as a computer animation house under the leadership of Steve Jobs, the software tools used to string together the more than 100,000 frames had been created in-house, and ran not on Windows but a variant of Unix.

Microsoft acknowledged defeat and sold off Softimage in 1998. By the early 2000s, Pixar, like most other animation outfits, had converted to Linux. Although Pixar's home-grown software tools, packaged under the name Renderman were ported to Windows and Mac OS X, Linux had by this time become the standard animation platform. Long-term Windows developer AutoDesk saw the writing on the wall, and in 2005 bought the cross-platform packages Maya and XSI.

So Linux rules, and scales nicely up as processor cores proliferate. But there are never enough of them. "In terms of processor power," says Granard, "one of the most expensive things we do is lighting the shot. You can imagine how frustrating that must be for artists, to create a sequence and then have to send it off overnight, and hope that it comes back looking the way you wanted it." Making intensive rendering like that near-instantaneous is what Granard calls "the Holy Grail". In a recent experiment he caught a glimpse of it.

"We pooled some of our HP workstations, and a few of the most powerful blades we have in our data centre, approximately 800 processor cores, and gave them to a single artist using one of our lighting tools. What would normally take overnight became pretty much an interactive session. I can't afford to give 800 processor cores to every artist. But we hit the biggest inflection point, which was proving we could do it."

Best of luck with that. Granard is up against "Blinn’s Law", first formulated by the NASA computer graphics pioneer Jim Blinn: "As computers get faster, the frames they're rendering become increasingly complex and nuanced. The average time to render an animation frame is a universal constant." ®