Films, according to Charles Simonyi – the man behind Microsoft's Word and Excel used by 500 million people – are great for showing the future of computing.

Simonyi reckons Kubrick's seminal 2001 a Space Odyssey from the moon-landing days of 1969 foreshadows the kind of video calls now in Skype.

Minority Report does much the same thing: in the 2002 film you see – among other delights from Philip K Dick and Steven Spielberg – the kinds of endlessly looping TV-digitised ads now pervasive in the back of cabs and on London's Underground and fingertip-based computer input now familiar on tablets and smart phones. 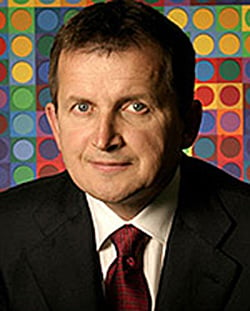 "They may not be a good indication of how the future unfolds but in terms of how the actual computes might look 10 years from now, I think movies are very good," Simonyi tells The Reg.

Films have had a profound impact on the life and work of Simonyi, now 63. And that's fortunate, given he invented something that has become so ubiquitous in computing that it has become invisible. He invented the What-You-See-Is-What-You-Get display, or WYSIWYG, in the early 1970s at the invention hothouse that is Silicon Valley's Xerox PARC.

"2001 [A Space Odyssey] was a new film in the early '70s and the displays there had a big impact on me. I also remember some science fiction I read in the late '50s that described CAD-CAM, which is a form of WYSIWYG," he tells us.

2001 was important in other ways: firing an interest in off-planetary affairs that turned Simonyi into a space tourist. He's been aloft twice with the Russian space programme.

Back to the WYSIWYG, though. This was a revolutionary creation: for the first time a computer screen could display text with formatting, and the page could be printed; also, you entered the characters via a keyboard or mouse not a series of rocket-scientist-like keyboard instructions.

Simonyi turned this into a mass-market reality at Microsoft, leading the Word and Excel teams. He joined Microsoft 30 years ago in 1981, laying the foundation of a $14bn Office cash cow. Today, there's hardly a work PC in the world not running Office, while Word and Excel have become established subliminally in our culture and lexicon, defining what we expect from word processing and spread sheeting, and short hand when talking about other software.

Thirty years on, and having made billions of dollars for Microsoft, Office is at a crossroads thanks to the web. There are echoes of the early days of Word and Excel; in the 1980s, Microsoft was just another software maker with big ambitions at the mercy of platform providers. Today, Microsoft is struggling to make its software stand out on web, against browser-based competition from the likes of ads and search Google with Docs.

Do Word and Excel have a life beyond the desktop, in the cloud and browser? "The functionality will be always needed. The form and environment may change," Simonyi says.

That said, the WYSIWYG has to evolve and become smarter, Simonyi says. To follow this idea he left Microsoft in 2002 to start Intentional Software – a 25-person company in Microsoft's Bellevue backyard that helps people design and build software. Customers include DARPA.

WYSIWYG needs to get smarter

"I learned a lot about the limitation of the WYSIWYG paradigm," Simonyi says of his two decades at Microsoft, where he'd served as director of application development, chief architect and distinguished engineer. "It is unfortunately what you see is all you get. Today we need even more – see more of the intentions behind the image."

For their shortcomings and challenges today, Word and Excel as part of Office claim 94 per cent of the office productivity market; Simonyi maintains Word and Excel deserve their success. "It's hard to find fault with them realistically," he says.

"You could say: 'I'd prefer X', but every time somebody says 'I prefer X' it has immense consequences. You'll find 100 million people who don't prefer X," he reflects.

"I really think we deserved the success," Simonyi says of Word, Excel and the Office franchise and how they've changed our lives and culture. "Word today is much more than a word processor, it's spelling, thesaurus and so on... it has changed people's spelling habits and their spelling mistakes have changed. In the old days, people used to misspell things, and today, people confuse the homonyms. The "there" as opposed to "their" is a now a common misspelling simply because of spelling correction in Office.

"The world is so much better off in having the Windows standard," Simonyi continues.