Simonyi switched to the WYSIWYG for the Xerox Alto, considered one of the first, modern personal computers. Built in 1973, the Alto is regarded as one of the first "modern" desktop PCs as it combined the mouse, Ethernet networking and GUI - all ideas that emerged from PARC research - along with a keyboard and monitor.

Simonyi tells us SIGnet had a "considerable hardware component, which I was not particularly good at developing" and gravitated to WYSIWYG with a project called Bravo, because it was "the lowest hanging and biggest fruit – a rare combination."

Simonyi built the Bravo WYSIWYG for the Alto in 1974 as a PhD project. Still, for people charged with charting the future, the PARC brass weren't exactly encouraging or supportive. Bravo had to be developed in stealth mode because of possible project overlap. Legend has it PARC saw no need for Bravo as the Alto already had an interface.

"No," says Simonyi, who corrects a myth that now lives on the internet. "The real problem was 'Polos', a complicated Nova-based office system done by the team that came from SRI [Stanford Research Institute], but you are right in that we had to do this as a subterfuge." 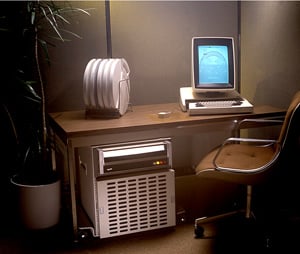 The Alto: a big system in its time

Simonyi got funding for experiments, not for programmers, and Bravo was coded using students from Stanford who were paid as "researchers" rather than programmers.

Proving PARC owner Xerox was not serious about the Alto as a commercial venture, it sold just 25,000 units to major customers including US aerospace behemoth Boeing.

History might have been stillborn had one of Simonyi's colleagues not treated him to a demo of VisiCalc running on a then-new Apple II. The Apple II had just been built by Steve Woz across Silicon Valley, having helped founded Apple Computer with Steve Jobs 1976.

Up until seeing VisiCalc on the Apple II, Simonyi says he'd looked down on the personal computer industry because "the numbers" were just so pathetic in terms of onboard memory – a fact that severely constrained what you could achieve. "I remember Larry Tesler [PARC colleague who worked on the Gypsy word processor and Smalltalk during Simonyi's time before jumping ship to Apple] bring in a Commodore with the chuckled keyboard and it was like a toy, especially at Xerox," Simonyi says.

VisiCalc delivered what PARC still dreamed of and did so using a "very basic machine": The Apple II ran from 4k to 48k of memory versus the Alto's up to 512k.

VisiCalc, released in 1979, was a landmark app – considered a "killer app" – and it is hailed today as the first spreadsheet for the personal computer. While it wasn't the first electronic row-columnar tabulation program that existed, it stood out by being available on the PC and Mac and by being interactive "in a WYSIWYG way", co-creator Dan Bricklin reckoned. VisiCalc reputedly "provided many business people with an incentive to purchase a personal computer" or an H-P 85 or 877 calculator from Hewlett-Packard. About one million copies of VisiCalc were sold.

Simonyi imagined what was possible using the Alto and other even more powerful machines that were coming and tells us realised he had to "get involved with the personal computer arena". Based on experience, this wasn't going to be possible at PARC.

Simonyi has said elsewhere that PARC's Xerox owner was "an old company going downhill." It wasn't just that they didn't have all the right answers to complex technology questions. "That's normal... But what bothered him the most was that they didn't know the right questions, either."

Fired up by VisiCalc, Simonyi took three important steps: the first was attending a seminar by Microsoft's then vice president of consumer products Vern Rayburn on the business opportunities of these newfangled computers. Simonyi was suitably impressed by the numbers on consumers and games and by Microsoft's language business. "I was very excited about languages and I thought I might do what ever was necessary to help with languages and the experience in apps might come in handy," he said.