Cast your mind way back to when Intel was more or less content to be a server CPU maker and let the system makers adopting its Pentium, Xeon, and Itanium processors decide the defining characteristics of the computers that used those x86 and IA-64 processors. Not so any more. Intel may not call itself a server-maker, but for all intents and purposes, with the upcoming Sandy Bridge-EP Xeon E5 processors, Intel controls the show and controls the design and manufacturing of the server platform – from processors and chipsets to networking motherboards – as proprietary server-makers from days gone by were able to do.

Intel has been talking about platforms – the combination of processors and chipsets – for the past decade. But in advance of the official Xeon E5 launch early next year, Intel is ramping up its production of server motherboards, taking on mobo-makers such as Super Micro in the server racket as well as those server makers who design their own boards and farm them out to ODMs in Asia.

Lisa Graff, general manager of the Enterprise Platforms and Services Division at Intel, didn't give out a lot of feeds and speeds when she talked about mobos at the recent SC11 supercomputer conference in Seattle, but she did give some insight into Intel's platform plans for the immediate future.

The revamping of the ESPD product line – what Graff called ESPD 3.0 – began in the first quarter of this year, with the launch of the Xeon E3 variants of the Sandy Bridge server platform intended for single-socket and microservers. And server-makers who rely increasingly on Intel parts told the chip-maker that they wanted more motherboards and more white box systems, more software and services, and to beef up support and services.

To that end, Intel plans to launch 22 different SKUs through the first half of 2012 in the Sandy Bridge family, including motherboards and complete systems in that count, which she said was three times the number of SKUs with the prior Xeon generation. In June, in the United States, ESPD started offering next-day break-fix service on its Xeon 5600 motherboards and systems, and plans to offer this on the future Xeon E5 boards and boxes as well. And in July, Intel cranked up the extended warranty on its parts by two years, offering five years of coverage for those server makers who want to shell out a little extra dough for it.

On the software front, Intel's ESPD has boosted its Multi-Server Manager tool, allowing server-makers to bundle Intel's own tools on machines and allowing administrators to manage up to 100 Xeon-based servers from a single pane of glass. And next year, said Graff, Intel will roll out a new tool called Server Continuity Suite that will allow admins to manage server hardware, RAID disk arrays, virtualization hypervisors, and backup and recovery all from that single pane.

While that is all interesting and useful, what we care about at this point is the hardware that Intel is going to deliver with the Xeon E5 generation of processors and when they will become available. Below are the seven new motherboards that Intel is making that use its Patsburg C600 series chipsets and that implement a chunk of its Romley server platform. (El Reg gave you the feeds and speeds on the Patsburg chipset and the memory and I/O configurations in the two-socket Romley platforms back in May, data that no one else had.) 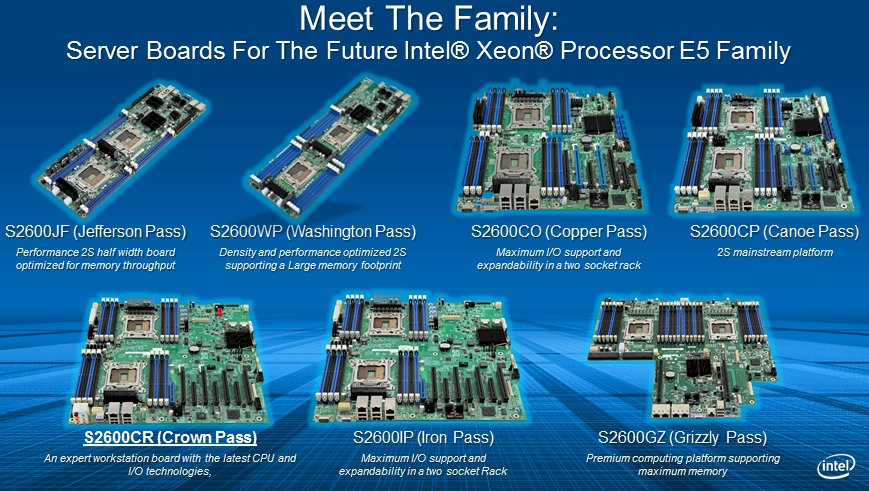 As you can see, Intel has a variety of fat and skinny two-socket Romley-EP motherboards based on the C600 chipset. The two half-width boards – code-named Jefferson Pass and Washington Pass and pictured on the upper left corner – were prominently on display at the SC11 event in machines from various server makers. They are indeed intended for HPC clusters and those building cloudy infrastructure where compute density is the most important factor. So was the Grizzly Pass fat memory node, which is also intended for memory-intensive HPC and virtualization workloads, according to Intel. The Grizzly Pass board is interesting in that it will be offered with either 16 or 24 DDR3 memory slots across those two sockets.

Here's where Intel is aiming its Romley-EP motherboards in terms of key markets: 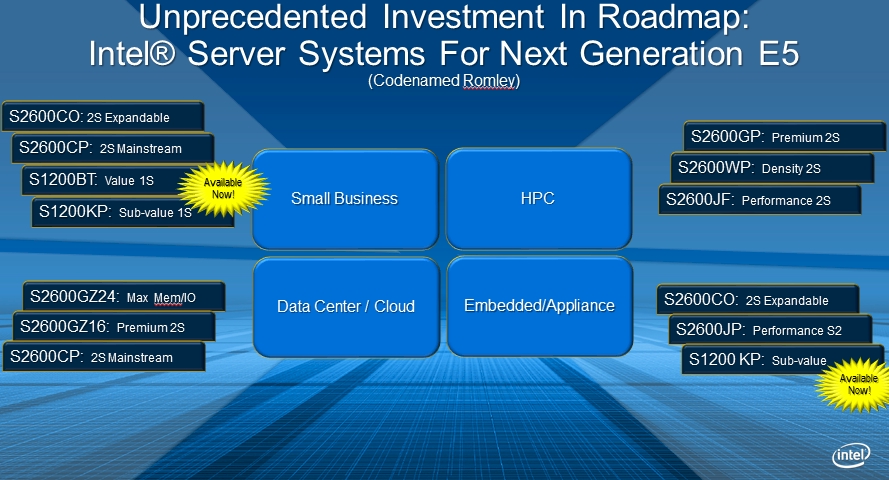 The Canoe Pass board is the mainstream data centre mobo, with eight memory slots per socket. Customers needing fatter memory will have to go with the fatter Grizzly Pass board, which will have 50 per cent more memory slots – a dozen per socket – and which will no doubt be used in physically larger servers to cope with the heat. The Copper Pass and Iron Pass boards are aimed at workloads where I/O is more important than memory capacity. The Copper Pass board is a little skinnier and has two fewer PCI-Express 3.0 slots than the Iron Pass board. Finally, the Crown Pass mobo is a variant of the Iron Pass board that is aimed at two-socket Xeon E5 workstations.

In terms of scheduling, Graff was intentionally vague about when the new Xeon E5 mobos would come to market: 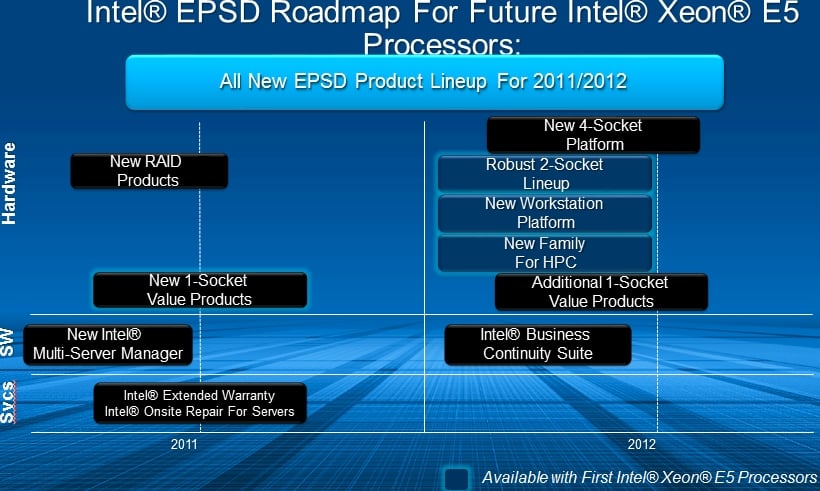 The boards shown above are due in the first half of 2012, according to Graff, which is about as vague as you can get – especially considering that Intel has been shipping the Xeon E5 processors and at least some of the Romley motherboards since September. All Intel has said officially is that the Xeon E5 launch will be "early in 2012", and, at this point, most people expect the formal unveiling to be sometime around the now almost-traditional March launch – don't forget that the Xeon 5500 and 5600 launches were held respectively in March 2009 and March 2010.

Intel will roll out more motherboards to support single-socket and four-socket Xeon chips later in 2012, and these presumably will be updates for entry Ivy Bridge processors for single-sockets and kickers to the current Xeon E3s and Sandy Bridge-EX Xeon E5 processors also due next year.

Next page: Just give me the whole box, Intel
Page: