Don’t try that excuse when the RIAA visit

A New York gallery is displaying a piece of “art” that consists of a one-terabyte portable hard drive chock-full of pirated code.

Manuel Palou’s “5 Million Dollars 1 Terabyte”, currently on display at the Art 404 gallery in New York, consists of a single drive placed on a plinth, containing stolen code from Adobe, Nintendo, and others. Pedantically speaking - given its name - the drive actually contains 1,016GB of data, and the estimated cost of the data is just $4,971,760. 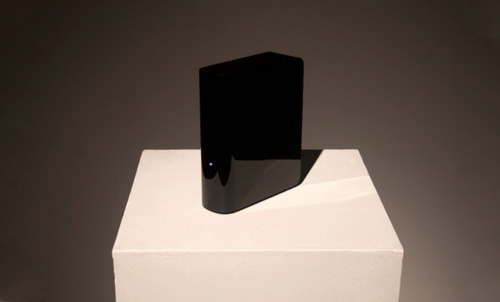 Very pretty, but is it art?

The piece is on sale, with the price set at the retail cost of the hard drive, presumably as a statement on the mirage of value applied to data by media companies in an interconnected, synergistic universe where the information superhighway creates cultural ghettos by offloading data at spurious values to reinforce global business hegemony ... or some such.

The gallery told El Reg that there are no buyers interested in the piece as yet, but we know there’s one born every minute, and with the current hard-drive shortage beginning to bite, there may yet be someone willing to splash out on this objet d’art. ®