Productivity on the cheap

The Pi team has spent months and months hunting for components that meet the right balance of size, cost and quality: go too small and the price can end up soaring, go too big and the PCB suddenly costs too much, go too cheap and standards slip. A 2mm wide capacitor (0805 packaged 10uF) can be ten times cheaper than a 1.6mm wide part (0603 package), for example, and then there's the bill for the robotic component placement in the factory, which is affected by design decisions - maybe two capacitors could be replaced by a larger one. These little savings, a penny at a time, add up for a $35 device that's being produced (at least, initially) in modest batches of 10,000 units at a time.

"Our desire is to kill off even components that cost a few tens of cents as, after all, each 25 cents is 1 per cent of our price," Eben Upton, a trustee of the RaspberryPi Foundation that's producing the board, told The Register.

Your baseline, unavoidable cost is some RAM and an application processor. Depending on the choices you make, this is going to cost the best part of $15, and then you're looking at a few dollars of board, connectors, assembly and margin. So we've gone pretty much as low as you can reasonably go.

I believe pretty strongly that the "natural" long-term price of a productivity computer is under $50 plus a display. 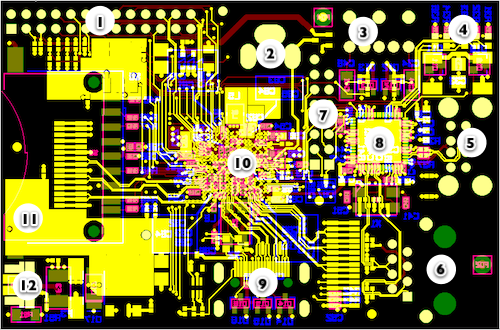 Eventually the timing circuits for the network and USB ports will be derived from a signal from the BCM2835 graphics processor rather than a clumsy external crystal oscillator. The Pi also slurps its power from a 5V micro USB socket, rather than an onboard PSU, in another bid to drive down the cost - an engineering decision taken within the past couple of months. There are all sorts of adjustments the team hope to make in future board revisions. Upton added:

The main challenge has been to get a high-quality signal escape from the BCM2835 processor, without loading the board up with lots of layers and high-density interconnect features (such as buried vias, etc). In principle there's nothing stopping us from going smaller, except that we would start sacrificing connectors and/or moving to less robust connector formats like micro SD and mini HDMI.

By and large, it's been a continuous process of small improvements and cost optimisations; Pete Lomas (one of our trustees, and MD of Norcott Technologies in Cheshire) has spent a lot of time working iteratively with potential suppliers to find cheap, decent quality components (particularly connectors). Pete has been working on sourcing components since at least May of this year, if not before, and has only recently come up with a configuration which he feels is near optimal. Silicon chip sourcing is simply a matter of what we can get our hands on that fits the target price and gives the best performance. 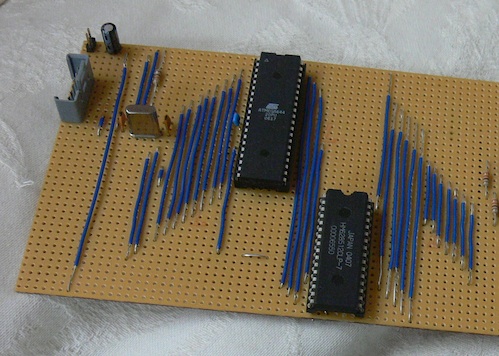 The Pi has certainly come from very humble beginnings: a 2006 prototype used an Atmel ATmega644 micro-controller, an 8-bit beast running at 22MHz with 64KB of flash memory, and 512K of static RAM mainly for the video frame buffer. A RaspberryPi in a USB key stick with a little camera fitted was demonstrated earlier this year, but the design was put on pause because it lacked the connectivity present on the latest boards.

Next page: So how will it help my kid to become a wealthy engineer?
Page: