HP has improved its Gartner Magic Quadrant rating by buying 3PAR - but Dell's rating has worsened following its Compellent buy, which has not compensated for its dropped EMC OEM deal.

These changes are shown in Gartner's Magic Quadrant (MQ) for block-access, external controller-based, mid-range and high-end modular disk arrays, and we have MQ charts for November 2010 and November 2011 to show the moves.

The MQ places supplies in a 2-dimensional space bounded by ability to execute on one scale and completeness of vision on the other, and forming four boxes as each scale is divided halfway.

There are two categories in the ability to execute scale at the left-hand part of the vision scale; niche players at the low end and challengers at the high-end. To the right of these are are the visionaries box at the low-end and the leaders box at the high end. Generally, stuff judged by Gartner to be good is in the top-right-hand box, the leaders' box, as near to the top right-hand corner as possible.

Customers tend to base a lot of supplier credibility on their MQ position and so suppliers are keen to display their Gartner rankings. Supplier positions can change due to their own actions and to what happens in the market. 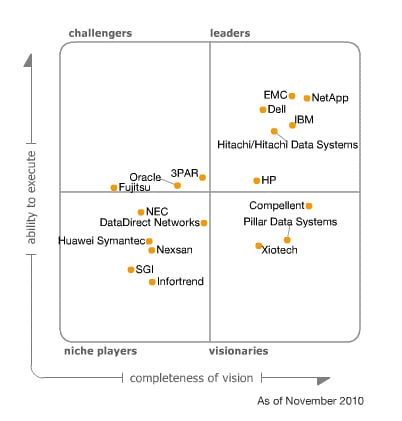 The four visible changes in supplier position since November 2010 are generally due to acquisitions, with HP improving its position markedly, Dell declining in ability to execute terms, though gaining visionary status, and Hitachi Data Systems falling back generally, as its AMS product appears to loses competitive strength. Naturally 3PAR, Compellent and Pillar have disappeared from the chart, bought by HP, Dell and Oracle respectively. All these suppliers, except Oracle, are in the leaders box. 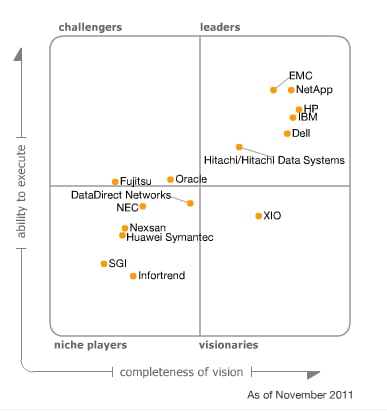 Xio, Xiotech as once was, is the sole entry in the visionaries box now, having failed to make the step forward, as Gartner puts it, into the challengers box. There Fujitsu and Oracle languish having equally failed to make the step forward into the leaders box. The niche players are exactly the same as last year, but with Huawei Symantec and Nexsan exchanging positions with Nexsan now being the more highly rated.

Now that Huawei completely owns Huawei-Symantec we would expect product innovations to follow.

Gartner is seeing a loosening of the IBM-Engenio and Oracle-Engenio OEM bonds following NetApp's Engenio acquisition. A copy of the November 2011 report that we have seen states:

Even though IBM and Oracle have signalled that they will continue to sell block-access DS5000 and Sun Storage 6000 series, respectively sourced from NetApp, they no longer hold a premier position as an IBM or Oracle offering; Gartner is already observing a decline in period-over-period revenue.

El Reg notes that there is a group of energetic flash-assisted and flash-array-based startups, such as NimbleStorage, Nimbus Data, Pure Storage, SolidFire, TMS, Violin Memory and no doubt others, visible on our radar screen but not on the MQ rating. We might expect that the mid-range and high-end storage MQ for 2012 will show one or more of these vendors in the visionaries quadrant.

Will they be joining Xio or will Xio have made the move to the challengers box? Watch this space. ®