Yes, but can it sing You've Lost That Loving Feeling?

A second X-47B unmanned stealth attack plane is now flying, and the US Navy expects the robot aircraft to demonstrate operations from an aircraft carrier on schedule in 2013. 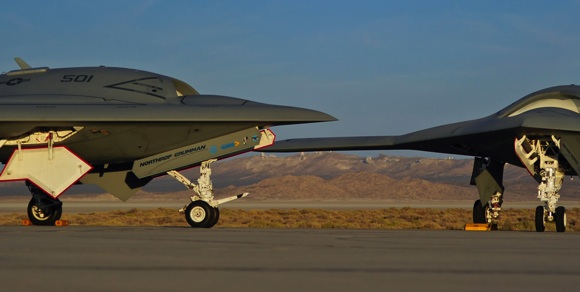 Maverick walked out onto the flight line ... and into a bad dream

Northrop Grumman, delivering the X-47B demonstrators for the USN, has just announced the successful first flight of the second aircraft, rather unoriginally dubbed "Air Vehicle 2". According to the defence-aerospace behemoth the flight took place last week above Rogers Dry Lake adjacent to Edwards airforce base in California.

"With two aircraft now available, we can increase the amount of aircraft performance data we gather, which will allow us to meet our required aircraft capability demonstration goals in a timely manner," said Northrop robo-bomber honcho Carl Johnson.

The X-47Bs are intended to show that a stealthy unmanned jet can carry out the full spectrum of operations from an aircraft carrier at sea, including catapult launch, arrested recovery and other necessary feats such as air-to-air refuelling. Many of these achievements, in particular carrier landings, are regarded as very difficult tasks among human pilots and a US carrier air group must spend much time and expense keeping its aviators trained up in them. Furthermore there is nowadays growing concern over carriers' possible vulnerability to various kinds of long-range missiles, meaning that US admirals are keen to keep them as far as possible from potentially hostile coastlines.

This last factor means that the carriers' aircraft need more range and endurance in order to deliver strikes ashore, and aircraft along X-47B lines are expected to excel in these areas compared to manned aircraft.

The X-47B is a computer-controlled unmanned aircraft system that takes off, flies a preprogrammed mission, and then returns to base – all in response to mouse clicks from a mission operator. The operator actively monitors the X-47B air vehicle's operation using simple situational awareness displays, but does not fly it via remote control, as some unmanned systems are operated.

In 2013, the program is scheduled to demonstrate the first carrier launches and recoveries by a tailless, unmanned, low-observable-relevant aircraft. Autonomous aerial refueling demonstrations are planned for 2014.

US naval aviators, who feel that their wings of gold shine with extra lustre due to the fact that they make their takeoffs shot from catapults and their landings onto pitching decks with the aid of tailhook and arrester wire, may be viewing the progress of the X-47B with mixed feelings. ®