Transmuting gigabits per second into dollars per quarter

Cisco puts a lot of effort into casing and analyzing trends in data center networking, which is why it has bought its way into successive markets and expanded out of its historical Internet routing business into switching, video, and now servers.

But the fact remains that the company still gets the bulk of its revenues and an even larger portion of its profits from switching and routing, and it needs that exploding growth in data center traffic to propel its finances in the future.

The good news for both Cisco and the competitors that are trying to take business away from it (and with a certain amount of success in recent years) is that traffic inside of and between data centers is growing very fast and is showing no signs of slowing down.

Unlike many IT giants, Cisco is sharing its data center traffic forecast – which you can read here. Cisco is engaging in a bit of marketeering by calling it a "cloud" index, but to justify that term the company is taking a stab at differentiating between bits that come into and go out of traditional, non-virtualized back-end systems at companies and the virtualized infrastructure that is commonly called a private cloud if you own it, and a public cloud if someone else does and sells you time slices on it.

Cisco's bit-counters and prognosticators reckon that 1.14 zettabytes of traffic flitted from machine to machine in the data centers of the world in 2010, and that that mind-boggling amount will grow by 44.7 per cent to 1.65 zettabytes in 2011. And while Cisco's "cloud index" touts that the compound annual growth rate of aggregate data center traffic will be 33 per cent between 2010 and 2015, Cisco's own numbers show that each successive year between now and 2015 will have lower growth.

The company also took a stab at figuring out who is hitting the data center and causing data to either move around within the data center or leave it. There is a lot of traffic flying around inside the data center, as it turns out, and comparatively little coming into or leaving it: 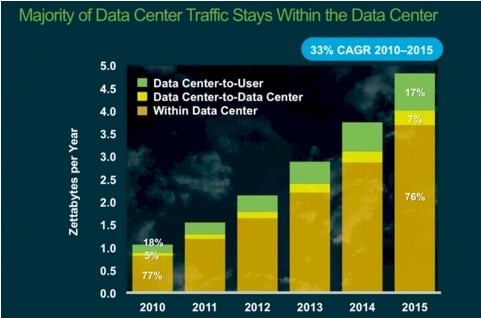 You might think, Cisco points out, that the popularity of video streaming on the internet would mean that data centers are pumping files out there to users sitting on PCs, swamping the amount of data being passed from data center to data center or within a data center. However, server and storage virtualization is increasing network traffic inside the data center because storage is no longer just internal to servers or on Fibre Channel-based storage area networks that have their own switches.

The n-tier architecture of applications, which is still a popular way of building applications and often on separate hardware devices, also increases network traffic; so do parallel processing jobs such as data warehousing, Hadoop data munching, and HPC simulating.

Thus, Cisco reckons that only 18 per cent of data going over networks inside the glass house in 2010 was reaching out to external end users, whether they were corporate employees or consumers. Another 5 per cent was for movement of files between data centers, perhaps for data replication or disaster recovery, and the remaining 77 per cent was data being bounced around inside the glass house as applications run. And as you can see from the chart above, Cisco doesn't expect that ratio to change all that much in the coming years. What Cisco does expect is for the amount of data to grow by more than a factor of four to 4.76 zettabytes by 2015. 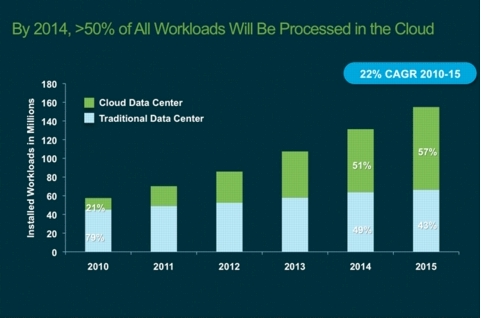 Cloudy workloads are on the rise in data centers

Those traditional workloads will grow by a compound annual rate of 8 per cent between 2010 and 2015, but cloudy workloads on virtualized servers – and predominantly x86 servers at that – will have a CAGR of 48 per cent. What this means is that those cloudy workloads will account for 57 per cent of the total of 154.8 million applications installed in data centers by 2015.

So you might be thinking that these cloudy workloads will account for most of the data center network traffic in the future, too, right? Wrong. Take a look: 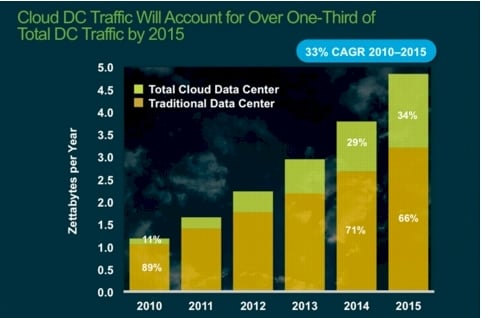 While cloud workload traffic within the data center will grow faster than traditional workload traffic over the next five years, cloudy apps will only consume a little more than a third of total data center network bandwidth by 2015. And most of that cloudy traffic will be outward-facing toward consumers with only a small portion being inward-facing for business users.

Cisco reckons that of the 131 petabytes of aggregate cloudy network bandwidth consumed by data centers in 2010, 115 petabytes was pushing or pulling data to or from consumers – and only 16 petabytes were for internal business users doing their day jobs. According to Cisco, by 2015, this cloudy bandwidth will grow by a factor of 13, to 1.5 zettabytes while cloudy bandwidth consumed by apps aimed at business users will grow by a factor of 9 to 139 petabytes.

The Cisco Cloud Index provides a slew of interesting statistics, including download and upload speeds by geographical region and by user type, broadband penetration by market, and its assessment of the network requirements for cloudy applications. Here's what Cisco reckons you need for different cloudy apps: 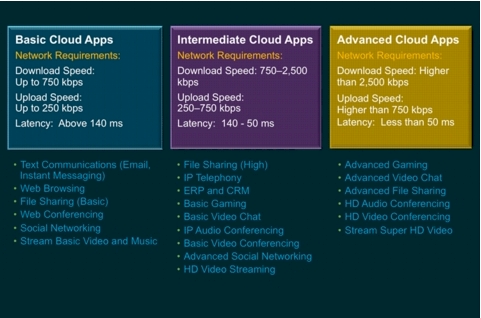 And as you might expect, Cisco says that the network infrastructure in the Middle East, Africa, and Latin America is suitable for basic cloud apps, and that companies in the Asia/Pacific region are able to handle some intermediate cloudy apps. North America, Central Europe, and Western Europe are better able to handle these cloud-based ERP and CRM software, basic video conferencing, and high-def video streaming.

And guess what? Surprise, surprise: no region as a whole has the kind of high-speed, low-latency networking that is necessary to take gaming, video streaming, conferencing, and file sharing up to 11. South Korea and Japan do, according to Cisco. But that's it. ®