Being uncompressed, RDAT remained superior, yet PASC actually worked very well having more air in the top end compared to Sony’s rival ATRAC (Adaptive Transform Acoustic Coding) method featured on the MiniDisc recorders that also appeared around the same time, but at a higher price.

Yet despite sounding better, the original DCC-900 was an enormous piece of kit and definitely not the in-car system that had been anticipated by the resellers. The portable DCC-170 did eventually appear, but by then, we were already becoming accustomed to CD-style track searching which was MiniDisc’s advantage over the fast-forward and rewind palaver with tape. 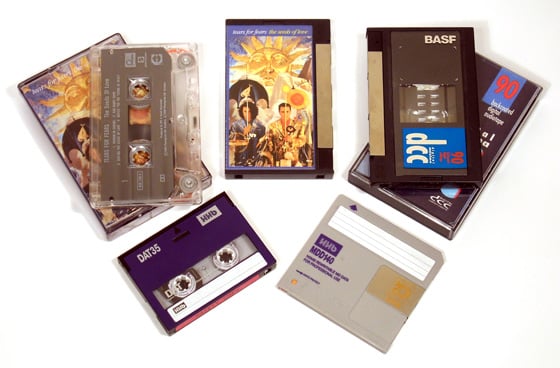 Pre-recorded analogue cassette and DCC version with recordable DCC and DAT tape formats. The MDD140 data cartridge shown is a MiniDisc variant that was utilised on 4- and 8-track recorders from Sony, Yamaha and Teac.

The psycho-acoustic principles behind the data-reduction methods employed by DCC and MiniDisc work along similar lines to methods devised for MP3 and AAC; it’s all about selective encoding of what the ear will perceive and dumping the rest. Yes, we can get that 10MB/min stereo CD-quality content down to 1MB/min to fit days of music on an iPod, but – as anyone knows who has experimented with low bit rate MP3 encoding – there are trade-offs.

This kind of lossy encoding is the audio equivalent of a Hollywood film set‚ it all looks real – but get close and you know it's fake. And that's the listening experience too, artefacts do present themselves, more so on quieter passages, but casual listeners will either live with it or skip on to the next track. Really, it's all down to how you regard music: chewing gum for the ears or masterpieces of creativity and performance.

If you fall into the latter camp, then, needless to say, lossless techniques have been devised which rely on mathematical functions to pack the data in more efficient ways, rather than alter its frequency content. These methods manage a 40 to 60 per cent data reduction – effectively two CDs for the space of one – and much like unzipping a text file, you get everything back, there aren’t missing characters.

Yet character is precisely what is missing with digital audio, and this became especially obvious in the recording studio. If you consider the success of apps like Hipstamatic, bringing old-style film quirks to digital photography, you can see straight away that unadulterated digital capture has a talent for the ordinary, rather than the extraordinary. Hence the creative need to fuck it up somehow, just to make it different.

Despite being an obvious choice, RDAT just wasn’t cheap enough to appeal to consumers, and its rather more enticing potential to allow CD cloning or self-styled compilations, had been scuppered in the US by Senator Al Gore’s 1987 CopyCode Act. As he remarked at the time...

There will be very little incentive any longer to go out and buy the recording when you can simply borrow someone else's album and make a copy just as good as the one in the store, or borrow someone else's copy of a copy and copy that, and still have a version identical in quality and in every way to the original version. 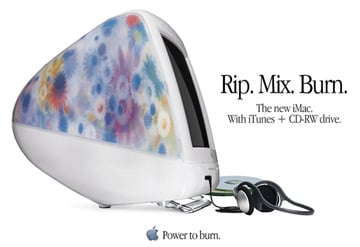 Given that digital’s raison d’être is to accurately preserve and restore data why should anyone be surprised by the mass appeal of flawless copying? With each new DRM, followed the inevitability that someone like DVD Jon would defeat it. The genie had been out of the bottle long before digital, but now casual copying didn’t happen in realtime any more.

This would be the same Al Gore who joined Apple’s board one month before the iTunes store opened. At least there was FairPlay DRM on those music sales, but lest we forget that the original iTunes slogan was “Rip, Mix and Burn”. Now there’s an inconvenient truth, but I digress.