Give Osborne a shovel: UK economy stuck in deep hole

Blames Eurozone, Labour, ANYONE but govt for 'debt storm'

The "debt storm" currently circling above the Eurozone is to blame for the gloomy state of the British economy, said the Chancellor of the Exchequer George Osborne, who delivered his autumn statement to the House of Commons today.

"Borrowing is falling, debt will come down, it's not happening as quickly as we wished... but we are going to see Britain through the debt storm," he said.

However, the Office for Budget Responsibility said that it was not predicting a recession in Britain, despite the fact that it has revised down growth prospects with GDP set at 0.9 per cent for the year, and drilled that figure down even further to 0.7 per cent in 2012.

The OBR expects the economy to recover to 3 per cent growth in 2015, Osborne told MPs.

The chancellor added that the Eurozone "needs to find a way through the current crisis". The OBR warned of a much worse outcome for the UK with Osborne adding that "it may prove hard for us to avoid one [a recession] here in the UK" if the situation in Europe doesn't improve.

Osborne told the House that the structural deficit will fall from 4.6 per cent of GDP to 0.5 per cent in the next five years. He noted, as reported yesterday, that more cuts were coming to increase spending on infrastructure and education.

Public sector employees will see their pay rise by just 1 per cent for the two years after the pay freeze is over, Osborne said. He cast the £5bn cuts planned for Whitehall to help pay for the government's plans to invest in the country's ageing infrastructure as "British savings for British jobs". 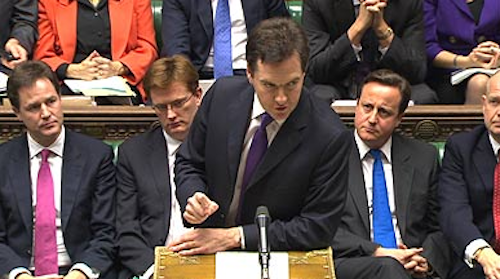 The chancellor also announced an "urban broadband fund" that would create 10 "super-connected cities" in the UK. Osborne said that the government had an agreement with two pension funds to unlock £20bn of investment for the National Infrastructure Plan.

"Leadership for tough times, that's what we offer," the chancellor doggedly said as he ended his statement to the House.

"Let's be clear what the OBR has told us today. Growth flat lining, unemployment rising, well over £100bn more borrowing that the chancellor planned a year ago," he said. "As a result his economic and fiscal strategy is in tatters... The verdict is in. Plan A has failed, and it has failed colossally."

Ahead of the chancellor's statement, the Treasury and the Cabinet Office leaked to the press a wide amount of what the government clearly viewed as "feel good" announcements that would be inevitably buried deep under the news that the British economy remains stuck in a hole.

The Register was told on Monday that medical research and digital technology would get a cash injection from the chancellor, with Silicon Roundabout leading the way in the hope of achieving Prime Minister David Cameron's ambition of creating a new Skype or Apple.

We also learned of a whole host of plans involving opening up more of taxpayer's data to the private sector in an effort to kickstart the economy by generating jobs in that sector.

Here's the meat-and-potato detail, direct from the Cabinet Office, about those plans.

Deputy PM Nick Clegg told the BBC ahead of Osborne's gloomy statement that the chancellor's plans for the economy would keep the UK "safe from the debt storm and the market turmoil in Europe and elsewhere".

He claimed the mini budget would support the poorest people in the country.

Clegg added that the autumn statement would "set out a plan to get building, to build the homes, the houses, the roads, the broadband infrastructure we need for a strong and prosperous Britain". ®