The world of Muvizu

Comment Tech startups that can truly be considered game-changers are rare - especially in Shoreditch. The more hype that the Silicon Roundabout "leisure startup" scene receives, the more painfully apparent it is that the emperor has no clothes – see these comments for example. Which is a pity, for less attention is paid to genuinely creative British tech startups.

I've rarely seen something as startling as Muvizu, the PC software from Digimania which allows a seven-year-old to start creating something a lot like Toy Story. The startup emerged from the ashes of the DA Group, which was previously Digital Animations. New investors took over the ashes and had an idea.

Perhaps the 3D power of games engines such as Unreal could be put to make a genuinely easy-to-use, consumer-level animation software. The development team had the chops for this; it was the team behind animated newsreader Anna Nova, for those of you who remember the first dot.com boom. And so Muvizu was unveiled two years ago.

You can get a glimpse of what you can do with it from this video - our sister site Reg Hardware reviewed it recently here. 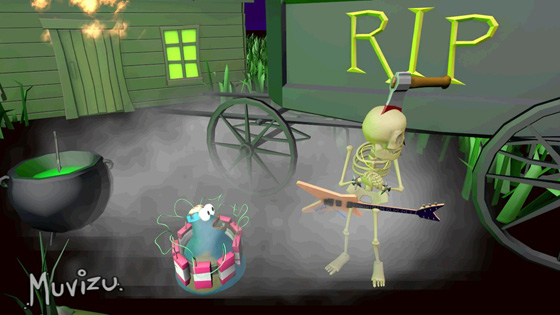 It's still a tiny startup in Glasgow, with a core team of half a dozen developers, but since then it has added a clutch of features: you can build your own models and characters, edit timelines, move cameras, create custom textures, and introduce anti-aliasing. Huge libraries of animations and art assets are now available. You can't import your own characters – but you can customise with textures.

It has notched up 138,000 downloads since August 2010, CEO Vince Ryan tells us. Muvizu took a community approach – and it is a lively place for users to share and swap assets and collaborate. It's useful for anything from 30 second funnies to in-house training videos.

But with no visible revenue, I was curious to see how Muvizu was paying the rent. Long-term it makes an enviable acquisition target for an Adobe or a Google – but for now it's looking to collaborate with animation companies, toy-makers or TV companies that want to extend their brand to their fanbase, allowing them to knock together their own stories and content.