MPs: This plan for proper navy carriers and jets is crazy!

Quite simply not a clue what they're on about

Analysis Today sees the release of two new reports into the UK's plans for its future aircraft carriers and their aircraft. As is common practice, a National Audit Office document is accompanied by one from the MPs of the Commons Public Accounts Committee. 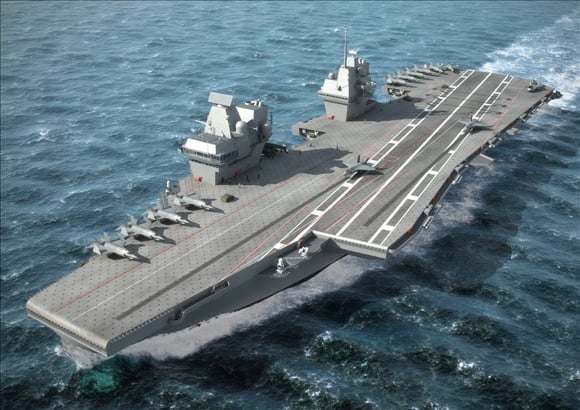 What we're getting now - and a good thing too.

The event that has inspired the NAO to break into print again is that its beancounters have now been supplied with paperwork from the new National Security Secretariat, the bureaucracy supporting Mr Cameron's new permanent "war cabinet". The NAO hadn't until now been allowed to see the documents supplied to the meetings last year at which the UK changed its carrier plans.

Just to recap, for those who've forgotten. Until last year's strategic defence review by the incoming Coalition (in fact largely by the Tories, controlling all the relevant ministerial posts), old Blighty had nominally intended to buy two large but cheap carriers propelled by gas turbines and without catapults or arrester wires.

This choice of ships meant that the only jets able to fly from their decks would be jumpjets, ones able to use vertical thrust to make hovering (or "rolling vertical") landings. After the retirement of the ageing Harrier, the only such jet available would be the F-35 Joint Strike Fighter B variant.

The trouble with this plan was that the F-35B (which is still going into service with the US Marines on current plans) will be one of the most complicated and expensive-to-run aircraft in the world. It is the first supersonic stealth jumpjet ever seen, packed with brand new and amazing machinery and its expensive stealthy hide pierced by an amazing array of flaps, doors, lids and vents for its vertical thrust equipment (every aperture in a stealth aircraft's skin means severe expense and maintenance burden).

The British NAO and Public Accounts committee MPs both suggest that the costs and risks of this plan were well understood and under control, but they couldn't be more wrong. The F-35B is still in flight test and the costs even of buying it are not yet clear - far less those of running it. For example it is strongly suspected that the terrifically hot exhaust from its downward-pointing engine will damage steel flight decks, to the point where the US government has seen fit to look into protective refrigerated decking for its ships. Furthermore the need to carry its lift fan in its vertical shaft, the swivelling jet exhaust, stabilising side jets and all those doors and lids and their associated motors etc means that the F-35B is by a significant margin a worse performing aircraft than the tailhook version the US Navy are getting, as well as being a lot more expensive.

Another issue which had essentially not been addressed at all under the former carrier plan was that of other types of aircraft needed in a carrier air wing - most importantly, radar aircraft. At the moment the UK uses radar helicopters, a solution improvised too late during during the Falklands war. But a radar aircraft needs to fly high, stay up a long time, and have a long range, and helicopters aren't very good at any of these things. However a no-catapult carrier would effectively condemn the Royal Navy to this as a permanent plan into the future, unless some extremely expensive (and still not particularly good) custom tiltrotor could be obtained one day.

So the former carrier plan was not, actually, a very good one and its costs and risks were in fact poorly understood and liable to be very high - expensive and underperforming aircraft would have meant poor capability and would almost certainly have wiped out the savings made by keeping the ships cheap and simple.

Next page: 'The technology has yet to be tested' - what's this video showing, then?
Page: