NetApp has lost ground for the second quarter in succession, Dell is pretty flat and HP growing steadily. These are the headlines from IDC's quarterly storage tracker for external disk storage.

The tracker looks at worldwide external dusk storage systems factory revenue and IDC ranks suppliers, giving them tied positions if there is a less than 1 per cent difference between their factory revenues. IDC rankings:

If we graph the supplier revenue share percentages over the past three quarters, this is what we see: 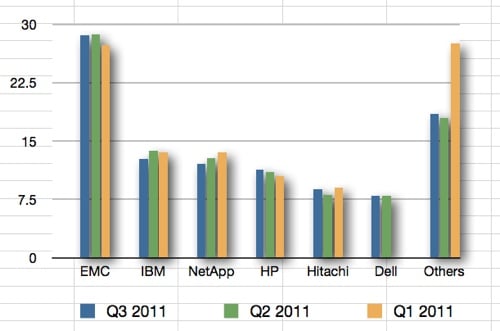 If these trends continue – which is a big "if" – then HP will overtake NetApp, possibly next quarter but most likely the one after that. NetApp fingered nine major accounts as the main cause of its recent quarter's poor results and it will be pumped up to reverse that trend.

Equally HP is regaining its va-va-voom under Meg Whitman's CEO reign and could gain ground strongly on the back of an energetically integrated and run storage operation. HP storage supremo David Scott could be excused for thinking NetApp is there for the over-taking.

If we look at IDC's tracking of the total disk market factory systems revenue, the category including direct-attached storage (DAS), there are no ties and the third quarter order is: 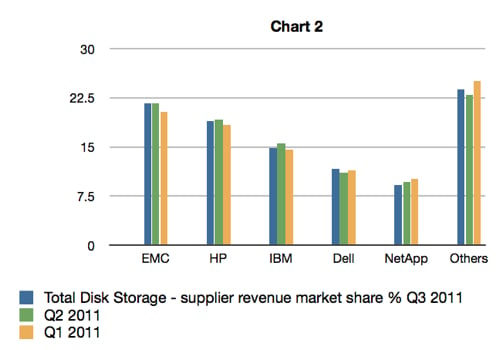 Graphing the results over the past three quarters again shows a steady decline by NetApp and generally upwards trends by all the other vendors for whom DAS is a growing source of disk storage revenue. The "others" category is down overall over this period. In this category, NetApp could disappear into the "others" category, joining Hitachi, if its revenue share continues down past 7.5 per cent.

In the Open SAN market, which grew 16.1 per cent year over year, EMC was the leading vendor with 25.3 per cent revenue share, followed by IBM in second and HP in third with 15.4 per cent and 14.0 per cent share, respectively.

The takeaways from this are that NetApp is showing weakness, HP is growing steadily, Dell may be losing ground on external storage, and the market is still growing, with a sixth consecutive quarter of growth. ®