Chip's got the write stuff

Micron has demonstrated Phase-Change Memory (PCM), enabling an app to run around 50 times faster than it would on NOR memory.

PCM is a post-NAND and post-NOR contender in the non-volatile memory arena; it's said to combine the speed and simple data access of DRAM and the non-volatility of NAND and NOR flash memory. It stores binary values by altering the physical state of a chalcogenide glass to be either poly-crystalline or amorphous. The state, which dictates the material's electrical resistance, is changed by running current through the material.

PCM is one of several candidates posited to replace both NAND and NOR flash as these technologies run into read and write performance and endurance walls as the underlying process shrinks.

There is a somewhat rough and ready video demo on Micron's blog, which shows off the addressability of PCM - there's no need to erase entire blocks of cells before being re-writing them. 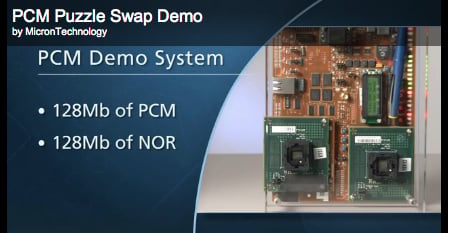 Micron's PCM (left) and NOR memory (pointed to by pen; right)

The demonstrated application unscrambles and scrambles an image stored in 128Mbits of PCM and 128Mbits of NOR memory. The image is written out 99 times to the memory banks.

The PCM version of the app unscrambled the image in a couple of seconds whereas the NOR version took up to two minutes, due to the number of block erases and re-writes involved. There is no precise timing involved but a Micron engineer, Brian Bradford, talks of an order of magnitude in performance between the PCM-assisted app and the NOR-based app.

This would mean, assuming 2 seconds for the PCM app and 1.5 minutes for the NOR app, that the PCM app ran 45 times faster. We might assume that PCM would be similarly faster than NAND which also has block-erase requirements before data is rewritten.

With HP stating that Memristor product could hit the market in 2013, targeting DRAM initially, the post-NAND and NOR stakes are hotting up and technology productisation is key. Micron is serving notice that its PCM efforts are continuing.

We also note that Micron has announced details of its 3D DRAM memory cube technology and it is going to competing against Memristor if its 3D cubes are ready in 2013. It also has irons in the spin-transfer torque-MRAM fire, as it is determined to be a force to be reckoned with in the post-NAND market. ®