I duly rigged up the display with a MacBook Pro in expanded desktop mode and plugged in a couple of hard drives: one USB 2.0, the other a Firewire 800. I tried an Ethernet cable too. The only thing I didn’t try was daisychaining a second Thunderbolt accessory because I didn’t have any. In fact, I’m not sure I can think of any, other than another Apple Thunderbolt Display. 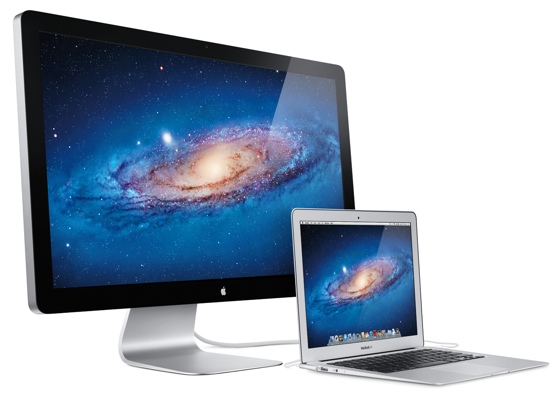 One extra 27in display not enough for you?

Just be warned that Thunderbolt daisychaining only allows for Thunderbolt devices. That is, you can plug the display into a Mini DisplayPort on a pre-Thunderbolt Mac, no problem, but then you wouldn’t be able to daisychain any DVI, VGA or DisplayPort devices or adapters from it.

Anyway, my point is that the display gave not the slightest flicker, freeze or twitch as I plugged and unplugged away at the back. 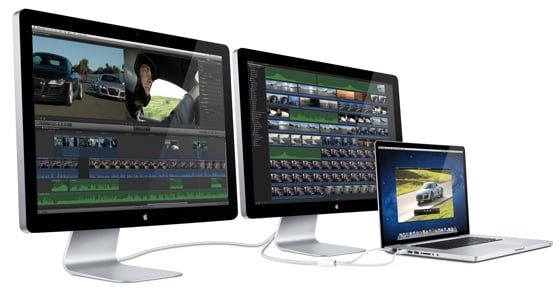 Then how about two?

But did Apple update its Boot Camp drivers to support Thunderbolt? Darn, yes it did. Mac OS X or Windows 7, the Thunderbolt Display took over everything from my laptop - even the audio, since the display contains its own 49W 2.1 stereo speakers. And a mic. And an HD webcam.

In terms of power consumption, the Thunderbolt Display sucked up a permissible 58-60W on its own, rising to 70-74W while also powering a MacBook Pro. Once I started adding external disk drives, this rose to 80W.

Oh oh so lovely. Oh oh so expensive. What else is there to say? It’s an Apple product, which means it’s built to a standard that makes you wet your pants but priced to tighten your scrotum. Just keep in mind that a Thunderbolt Display needs a Thunderbolt Mac, and I wish there were more Thunderbolt peripherals to make me feel better about the whole Thunderbolt thing. If there were, and the display was about £150 cheaper, I’d rate it at 90 per cent or higher. ®

Thanks to Square Group for the review sample