There may be a fine line between "administration" and "regime", but Syria's president Bashar al-Assad has definitely crossed it. His government's latest repressive move? Banning the iPhone.

To be sure, Assad's regime has committed crimes far more serious, as the over 4,000 men, women and children killed since protests against his rule broke out in late January make clear.

The ban on iPhones, however – as reported by a Lebanese news service – is more than a mere outlawing of a bit of trendy shiny-shiny. It is, instead, yet another step by the Assad regime to deny its opponents tools of communication. 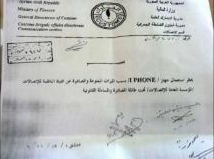 'The authorities warn anyone
against using the iPhone in Syria'

Syrian internet connections, for example, were strangled in July, in what appeared to be a government-orchestrated effort to stifle communication among activists. The regime has also banned most foreign media from entering the country to cover the protests.

The iPhone-banning order, Beruit-based Syrian activists told the Israeli newspaper Haaretz, was issued by the Customs Department of the Syrian Finance Ministry.

"It is enough for any tourist or guest visiting Syria to own an iPhone to be a spy suspect," one unnamed activist told Haaretz.

The same activist then noted the irony of the ban. "Steve Jobs must be turning in his grave on learning that his iconic device is banned in his home country," he said.

Syria is hardly Jobs' "home country" – the late Apple cofounder was born in San Francisco and adopted by Paul and Clara Jobs shortly thereafter. His biological father Abdulfattah Jandali, however, was born in that now-benighted state.

The Reg wagers that no one in the Assad regime gives a damn about that irony. ®