NASA probe now closer than ANY OTHER spacecraft to Pluto

A NASA probe came closer to Pluto than any other vessel in the history of space travel on 2 December.

The New Horizons mission broke the closest-approach mark to the dwarf planet of 1.58 billion kilometers that was set by NASA's Voyager 1 in January 1986.

To reach that milestone, the spacecraft spent 2,143 days, or nearly six years, in high-speed flight. It covered around 1 million kilometers per day.

“Although we’re still a long way - 1.5 billion kilometers from Pluto - we’re now in new territory as the closest any spacecraft has ever gotten to Pluto, and getting closer every day by over a million kilometers."

The spacecraft is currently as far from Pluto as Earth is from Saturn, the New Horizons team said in a blog post. 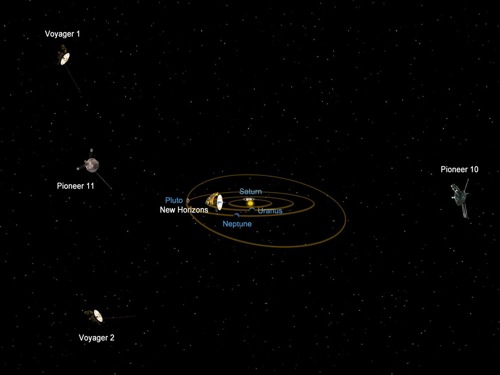 Pluto, which was demoted to a dwarf planet in August 2006, is about 5 billion kilometers from Earth.

The New Horizons probe is expected to pass through the Pluto system in mid-2015, by which time the team expects to see features as small as a football field.

“When we launched [on 19 January 2006] it seemed like our 10-year journey would take forever, but those years have been passing us quickly. We’re almost six years in flight, and it’s just about three years until our encounter begins.”

New Horizons is only the fifth such vessel to transverse interplanetary space so far from the Sun, and it's the first to travel so far to reach a new planet for exploration.

“I wonder how long it will be until the next Pluto spacecraft - perhaps a future orbiter or lander - crosses this distance marker?” Fountain added. “It could be decades.”

The New Horizons vessel is currently in hibernation, a setting it has been switched to for much of its journey since lift-off nearly six years ago. It is moving more than 55,500 kilometers per hour away from the Sun.

It will be taken out of sleep mode in January 2012, when operators at the Applied Physics Lab will spend a month testing and maintaining the craft to ensure that New Horizons is still healthy.

The vehicle has imaging infrared and ultraviolet spectrometers on board, as well as a multi-colour camera, a long-range telescopic camera, two particle spectrometers, a space-dust detector and a radio science experiment.

Its purpose is to "characterise the global geology and geomorphology" of Pluto and the dwarf planet's moon Charon. ®