Secrets of the asteroid belt: Vesta actually more like a planet

New images of the asteroid Vesta captured by NASA’s Dawn spacecraft indicate it’s more like a planet than a dead rock. 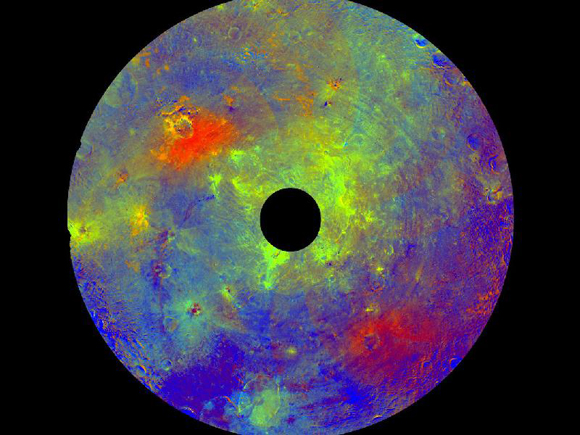 Different rocks and minerals on the surface of Vesta. Credit: NASA/JPL-Caltech/UCLA/MPS/DLR/IDA

Vesta is a unique asteroid because of the wide variety of rocks and mineral types found on it, illustrated in the picture by the different colours.

"The distinct compositional variation and layering that we see at Vesta appear to derive from internal melting of the body shortly after formation, which separated Vesta into crust, mantle and core."

Images from the camera show differences in the rock composition from impacts and from slumping, giving a glimpse of what’s ‘underneath’ the surface. This in turn reveals that the materials seen contain the iron-bearing mineral pyroxene and are a mixture of rapidly cooled surface rocks and a deeper layer that cooled more slowly.

The Dawn spaceship launched in September 2007 and made it to Vesta in July this year. After spending a year studying the asteroid, the craft is due to depart for the dwarf planet Ceres, which it will reach sometime in 2015.

Both Vesta and Ceres are believed to have formed early in the history of the solar system and boffins hope that studying them will help to figure out the processes that sent each on its evolutionary path. Or to put it another way, to find out why one of these bodies become an asteroid and the other a dwarf planet?

The scientists hope that figuring that out and the study of Vesta and Ceres will also lead to more knowledge of how the solar system as a whole was formed. ®