Iranian state television has shown video of what it claims is a US spy drone that was hijacked by its army's electronic warfare unit.

The government has shown footage of what appears to be a Lockheed Martin RQ-170 Sentinel, which the Iranians claim was flown from Afghanistan over the northern city of Kashmar when it was taken over and piloted down by army electronics specialists. Pentagon sources confirmed to the New York Times that contact had been lost with a drone, but did not confirm if it was the machine shown.

According to the web site for Iran’s Revolutionary Guards, the drone has wings spanning around 26 meters, is around 4.5 meters in length and 1.84 meters high. It has a tailless, flying wing design and contains advanced systems of electronic data collection, imaging and communications, and various radar technologies. 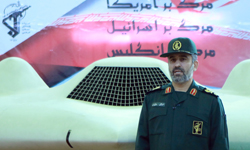 The drone itself appears to be relatively undamaged, although the underside is covered. While the Iranian military are claiming it took control of the drone and landed it, experts have their doubts. The RQ-170 is highly stealthy and is thought to cruise at extremely high altitudes, as high as 50,000 feet. That makes the possibility of it being shot down unlikely, yet the chances of successfully hacking the device are considered slimmer than an anorexic supermodel.

This could suggest that the drone being displayed is a dummy, and is being used to embarrass the US. Local media is reporting that Chinese and Russian advisors have asked for permission to inspect the downed drone.

The Iranians have also lodged a formal complaint over the drone’s incursion into its airspace, and may be asking for compensation. The US hasn’t had an embassy in Tehran since it was taken over in the 1979 uprising (despite what Republican presidential candidate Michelle Bachmann might think) and so the protest was lodged with the Swiss ambassador who handles American diplomatic matters. ®