'Sort of thing that makes boffins leap out of their chairs'

NASA's famous robot rover Opportunity, still prowling the haematite steppes of the Meridiani Planum on Mars seven years after setting down, appears to have discovered concrete evidence that liquid water once flowed across the surface of the red planet. 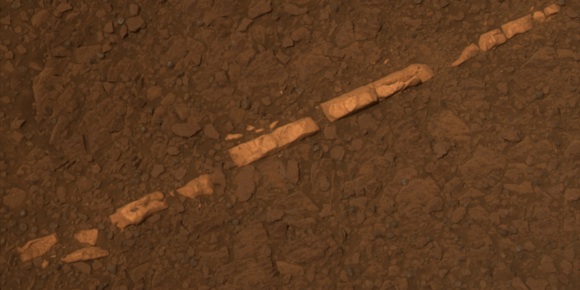 There (once was, probably) water in them thar red hills!

A bright vein of what scientists believe to be gypsum has been found by the rover, which could only realistically have been formed by flowing water.

“This tells a slam-dunk story that water flowed through underground fractures in the rock,” says Steve Squyres of Cornell University, lead Opportunity boffin. “This stuff is a fairly pure chemical deposit that formed in place right where we see it. That can’t be said for other gypsum seen on Mars or for other water-related minerals Opportunity has found. It’s not uncommon on Earth, but on Mars, it’s the kind of thing that makes geologists jump out of their chairs.”

The vein examined most closely by Opportunity is about the width of a human thumb (0.4 to 0.8 inch), 16 to 20 inches long, and protrudes slightly higher than the bedrock on either side of it. Observations by the rover reveal this vein and others like it within an apron surrounding a segment of the rim of Endeavour Crater. None like it were seen in the 20 miles (33 kilometers) of crater-pocked plains that Opportunity explored for 90 months before it reached Endeavour, nor in the higher ground of the rim.

The gypsum vein has been named "Homestake" by the NASA scientists. They believe, having examined it with instruments on the rover, that it is made up mainly of hydrated calcium sulphate, aka gypsum, used on Earth for making plaster of paris and plasterboard. Gypsum has been detected on Mars previously, by orbital observations, but never in a form suggestive of being formed by flowing water.

Opportunity can't hang about and probe the mysteries of the Homestake indefinitely, however. The machine is heading towards a north-facing slope on the Endeavour Crater rim in order to get its solar panels aligned suitably to survive the impending Martian southern-hemisphere winter. Its companion rover Spirit failed to do so when autumn came to its area of operations in the Gusev crater, due to being bogged in a sand trap, and so failed to keep its power levels high enough to reanimate with the coming of spring. The valiant machine has not been heard from again.

Provided Opportunity can get into a good spot for hibernation, however, there seems to be every chance that the veteran robot will still be roaming the red plains of Mars when NASA's new rover, Curiosity, comes in to land beneath its rocket sky-crane in the Gale Crater next year.

Curiosity, being nuclear powered, is expected to cover a lot more ground than the solar-powered Spirit and Opportunity could in the weak sunlight of Mars. One day, however, its nuclear power source will decay down to the point where it no longer provides a viable amount of juice. This will, based on past history of nuclear powered space missions, be well after NASA's provisional 2014 mission end date, but it will happen in the end. There has to be some chance that Opportunity will still be crawling slowly along - or possibly acting as a stationary science instrument - even then. ®