Hollywood's big plan to update the industry for the digital era - UltraViolet - comes to the UK on 26 December, the consortium behind it has revealed. It will be an inauspicious start, represented by just one new movie release, but there's no mistaking the ambition of the project. Three years in the planning, UV is Hollywood's attempt to get right what the music business has got woefully wrong, and it isn't unreasonable to describe it as the biggest shift in thinking in the history of the movie industry.

Since the launch of VCR systems in the mid-1970s, consumers have merely bought a limited licence to watch a movie. New formats have been an excuse for Hollywood to get us to repurchase the content. But digital networks have made a nonsense of that notion, and enabled a huge new range of diverse devices and formats.

So, through UltraViolet, punters will buy a universal, lifetime right to watch a movie in any format they want; it may be streamed to any device from the cloud, or downloaded to any device. A purchase of a UV BluRay pack or DVD contains a redemption code that automatically grants these rights to stream or download the movie too. Eventually, UV-enabled TVs and set-top boxes ought to make it all seamless: you own the movie for life, and should be able to play it anywhere.

Perhaps more significantly, the scheme is devised to encourage retail participation. Users can manage their UV accounts through the web, or through apps such as Warner's Flixster. Netflix, LoveFilm and FilmFlex are also supporters. And supermarket giant Tesco is one example of retailer banking on UV to enter the home movie business. Tesco is expected to create UV accounts automatically from customers existing Tesco cards, if user so wish.

I had a preview this week - here's a report.

UV is an account-based system, but an account can have up to five members, and the key account-holder can set several levels of access for the members of a household: so kids can't see adult-rated movies, for example. Three members of the same account can watch streams simultaneously, say, if they are in separate rooms or geographical locations.

The account can be managed through the website uvvu.com, or a partner app or website. So expect to see UV embedded into Amazon and Tesco accounts, or Netflix and LoveFilm profile pages, from which it can stream to your set-top box or PC.

I saw the Flixster app used to manage the library, acquire a licence, and stream a movie to an iPad. The Flixster app runs on iPhone, iPad, Android and Blackberry, and integrates Rotten Tomatoes reviews into the app. It was all pretty straightforward. There will be dozens, and probably hundreds of ways of doing this, all with your personal library at the end of the network.

"We don't expect people to be indentured to one retailer all their lives," is how Mark Teitell, executive director of the DECE consortium behind UV, explained it to me.

(So here endeth the era of the proprietary 'ecosystem', perhaps.)

To set up a UV account you don't need to give much information: pretty much just an email account that can be validated. No credit card information is required. This is by design - to encourage retail participation. The first UK movie to contain the UV redemption code will be Final Destination 5. Warner tells us all new theatrical releases will contain a UV code, and all major studios will be giving it some marketing welly from the middle of 2012 onwards.

Streaming just starts - there's no user device authentication, it just fires up. I gather that up to 12 devices can be authenticated for streaming - just delete one you don't use any more, or allow them to drop out as new ones are added. The consortium hopes this will be enough for most accounts. 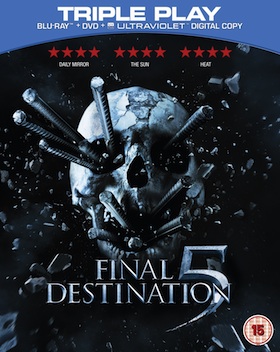 The next stage in the UV roadmap will be downloading - and here the consortium needs to agree a common file format, which it expects to have in place some time in early 2012. This will be an umbrella for five industry DRMs. Yes, it's DRM, but again with enough flexibility built-in (the DECE hopes) so that users don't notice. The whole idea is not to use DRM to force you to pay each time, but to reward you for paying with lots of options. Once the file format is in place, the consumer electronics giants and set-top box manufacturers such as TiVO are expected to launch their UV-ready consumer gear. Sony, Samsung, Toshiba, LG, Fujitsu and Panasonic are DECE members.

An inauspicious start, then, come Boxing Day? Not so, argue the studios: with UV you'll already have a lot more out of the box than Hollywood has ever given you. You'll have a lifetime licence, and the flexibility to stream to any device from the cloud. Warner says most of its new theatrical titles including Happy Feet Two, Sherlock Holmes: A Game of Shadows and The Dark Knight Rises will be UV-ready.

It's hard to underestimate the shift in thinking here. It's a seismic shift in attitude by the entertainment industry, and one that's taken some people by surprise: note this tweet from a campaigner at the taxpayer-funded quango Consumer Focus, made just only two weeks ago. It isn't just consumers that the DECE needs to educate, it's "professionals" who might need to change their script...

Your taxes at work: 'copy-fighters' don't seem to have heard of UV

The only notable refusenik is Disney. Disney has a close relationship with Apple, which has its own proprietary 'ecosystem' for accessing movies - requiring Apple's iTunes, Apple's DRM and hardware. But DECE members think that might be Disney's problem, rather than UV's:

"All of the studios behind UV will make sure they're UV compatible by the end of next year," Robert Price of Fox told us. "It'll be odd if it doesn't have a UV number.

"This is a nascent launch. Where we are today isn't where we're going to be in two years' time..." ®