Oracle and IBM fight for the heavy workload

IBM and Oracle agree about little these days, and they are coming at it from different angles, but both IT giants believe that some companies don't want general-purpose machines; they want machines tuned to run a specific stack of software for a particular kind of workload.

IBM calls them "workload optimised systems" and Oracle refers to "engineered systems". What are these machines and will they sell?

Oracle is making a lot more noise about its Exadata and Sparc SuperCluster machines than IBM is with its Smart Analytic System, DB2 PureScale database clusters and Netezza data warehousing appliances.

But as a relatively new player in the systems game after spending $7.4bn to acquire Sun Microsystems in January 2010, Oracle has to make a lot of noise if it wants to be heard.

Sun Microsystems failed as a volume x86 server player and Oracle knew it would have to take a different tack to compete against Big Blue in the systems business.

More than a year before the Sun deal was done, the HP Oracle Database Machine featured a storage server tuned for the Oracle database called Exadata. It set the stage for the current Exadata database clusters, the Exalogic application server clusters and their Sparc-based SuperCluster brethren.

The original HP-Oracle appliance had eight ProLiant servers nodes to run a parallel implementation of Oracle's 11g database, glued together by Real Application Clusters (RAC) clustering software. This allows a database to be parallelised, giving it fault tolerance and scalability.

The Exadata storage nodes compress database files using a hybrid columnar algorithm so they take up less space and can be searched more quickly. They also run a chunk of the Oracle 11g code, pre-processing SQL queries on this compressed data before passing it off to the full-on 11g database nodes.

The database and storage nodes in the HP-Oracle Database machine ran Linux and were linked together with a 20Gbps InfiniBand network.

Then Oracle bought Sun and had a religious conversion to hardware. Specifically, it put its faith in Sun's Constellation server, with its faster InfiniBand networking and flash-accelerated server platforms.

And in September 2009, between the time it announced the Sun deal and the time it closed it, Oracle kicked out a revved-up line of machines, named Exadata after the storage servers at the heart of the system. They supply much of the system's oomph when running Oracle database workloads for online transaction processing (OLTP) or data warehousing.

Oracle has sold 1,000 of these Exadata machines to date and says it will sell another 3,000 before its fiscal 2012 ends in May.

There are currently two Exadata database appliances, and it is likely that Oracle will add another one at its 2012 OpenWorld customer event in San Francisco.

The Exadata X2-2, launched in September 2010, is an upgrade of the first generation of Exadata machines based on Sun hardware, which was called the Exadata V2.

The Exadata X2-8 database nodes have eight processor sockets and the Xeon 7500 processors have more cores per socket, as well as fatter main memories. This means the machines can run heavier database instances and rely less on RAC for scalability. 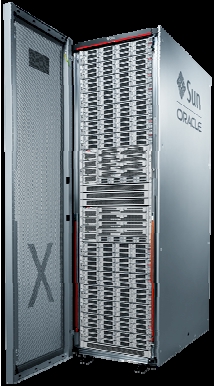 The rack has three of Oracle's own 36-port QDR InfiniBand switches, which are used to cross-couple the database nodes and link them to the Exadata storage arrays. The Exadata units are based on the Sun Fire X4275 two-socket Xeon server with Oracle's own F20 FlashFire PCIe flash memory modules. Each of these has 96GB of flash capacity and plugs into PCI-Express 2.0 slots on the machines.

These X4275 servers have room for a dozen disks, and Oracle is offering two disk options: high-performance 600GB SAS disks that spin at 15K RPM, or high-capacity 2TB SAS drives that spin at 7.2K RPM.

The rack has 14 of these Exadata arrays, yielding 168 cores with 5.3TB of flash cache to chew through data before passing it on to the database nodes.

Oracle says the Exadata X2-2 has 25GBps of disk bandwidth using the faster disks and 75GBps of bandwidth coming out of those flash drives, which have been tuned to the 11g database to keep the hottest data on the flash rather than the disks.

The rack of Exadata X2-2 can load data at a rate of 12TB per hour and has 45TB of usable uncompressed capacity, delivering 50,000 disk I/O operations per second (IOPS), and up to 1.5 million out of the flash.

The high-capacity option delivers three times as much usable database capacity, but only half the disk IOPS. Up to eight racks of the Exadata X2-2 machines can be linked through InfiniBand switches, but it is not clear how well RAC scales across these clusters.

Next page: Count the cost
Page: