Until now, quantum computing has suffered the same problem that vacuum tubes had in the 1950s: the hardware’s too damn big – a problem addressed by Bristol boffins who have put a reconfigurable two-qubit processor on a single chip.

Just creating and manipulating a pair of qubits usually needs a tabletop’s worth of equipment, explains Professor Jeremy O’Brien, director of Bristol’s Centre for Quantum Photonics.

The university’s 70 x 3 mm chip – still a very large feature size by electronics standards, but tiny in the world of quantum computing – achieves. 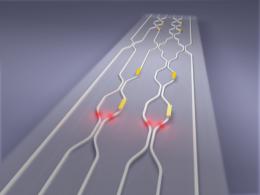 Artist's impression of the Bristol

It can’t be regarded as a “processor”, since O’Brien also said that this chip is for conducting experiments, but it’s still a considerable advance.

The chip demonstrated by Bristol allows a variety of experiments: creating entanglement between photon pairs; manipulating photons’ states; and measuring “mixture” impacts on the photons from the outside environment.

The device comprises waveguides for the photons, and electrodes to perform quantum operations on single photons. For example, the electrodes – acting as phase shifters – can control the entangled states of two photons (as O’Brien described them, “IC qubits”), or the mixed (ie, the impact of environmental noise) state of a single photon / ICqubit.

This chip, Dr O’Brien told The Register, works in one degree of freedom – the photon’s path. This still provides very broad entangled states for experimentation: “you can think of the state as being parameterized by several continuous numbers,” O’Brian said. “We can control these parameters continuously using the phase shifters we have on-chip.”

Reconfigurability is the other key characteristic of the device, since many different experiments can be performed on one device, under software control.

The research is published in Nature Photonics.®

McKinsey thinks quantum computing could create $80b in revenue ... eventually