Next, get busy in the TeV range

Analysis If people still wore as many hats as formerly, CERN would have seen plenty of caps in the air when the latest Higgs boson results were announced.

The LHC data is still shy of certainty: as spokesperson Fabriola Gianotti says in this video, a lot more measurements will be needed, but those measurements are going to concentrate on the 125 GeV (giga-electron volts) range as the place where the most interesting signals have been identified.

Actually, the range that the LHC is talking about isn’t quite so fine as 125 GeV: it’s in the range 116 to 131 GeV. For those with the training, the Arxiv paper is here. 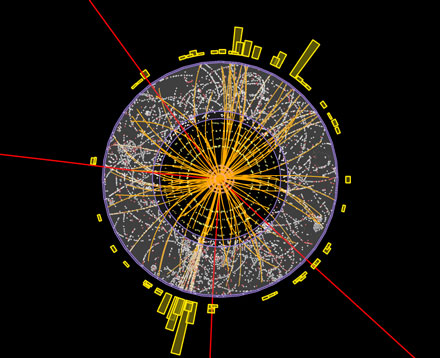 A Higgs in the hand? Source: CERN

There’s still room for plenty of work, but as Gianotti said, if the Higgs has been nailed down, “a new physics should manifest at the TeV scale”.

The story so far is that we’ve been looking for the Higgs boson for a very long time.

The elusive little object is pretty much why the Large Hadron Collider exists: to create the kind of energies under which the Higgs Boson might momentarily exist. To make things even trickier, even if you get a collision that produces the particle, you won’t see it directly. All you will see is the stuff that the Higgs Boson decays into.

This makes the Higgs Boson a lot harder to detect than, say, the electron. Finding electrons is easy; you can do it just by wearing the wrong kinds of shoes on the wrong kind of carpets in the right kind of weather (even finding an electron requires an input of energy; in this case, the scuffing of the shoes on the carpet).

I won’t recite the whole standard model to you – if you want a list of the particles, you can find it here – but the point of the Standard Model is that if it’s correct, then it describes the whole of the universe of matter and energy.

Via the class of particles called the fermions, we get protons, neutrons (both built out of fermions), and electrons (which is a fermion); from the exchange of bosons, we get energies.

What the bosons do

The kinds of bosons already observed were the photon – easy to catch – the gluon, and the W and Z bosons. The gluon, as its name implies, sticks stuff together: without it, we wouldn’t have atoms, since the electromagnetic force would (for example) stop protons from staying in the same place.

The W and Z bosons were an important development in theoretical physics, since they offered a way to unify the electromagnetic force and the weak nuclear force in a single theory.

Which left the Higgs boson.

One aim of a unified theory is to create a single set of equations that can describe all of the fundamental interactions – from how an atom is built to how it decays, from how light passes around to how quarks stick together.

And how particles acquire mass: the last piece of the puzzle, predicted in the early 1960s as the mediator of mass, but never observed.

Why it was hard to see

Associate Professor Csaba Balazs, theoretical physicist at Monash University, explained to The Register that the Higgs presented a host of problems to the seekers: its mass, its short lifetime, and the difficulty of identifying Higgs interactions from other experimental results that look similar.

Mass: Its mass is a problem: whereas the mass of the electron is tiny, the Higgs’ mass was predicted to be “something like the mass of two copper atoms”, he explained. That’s why the LHC was needed in the first place: a particle accelerator that produces low-mass stuff can’t produce the much higher energies needed to see the Higgs.

Lifetime: The Higgs doesn’t live very long; while (to the layperson) a proton may live forever, the Higgs’ lifetime is in the order of a billionth of a billionth of a second. After that, it decays – which means all the CERN folk get to look for is the footprints left behind when the Higgs dies.

Interaction: Because the Higgs interacts weakly, there’s a very low probability that any particular event will actually create one, which means that CERN has to create billions of collisions just to generate enough events to get a reasonable probability that they’ve created Higgs bosons.

Noise: Finally, Balazs said, the Higgs signal has to be separated from the noise.

This needs a little more detail: since the Higgs isn’t observed directly, CERN is looking for a particular signature in the events it detects.

That signature, Balazs explained, is a pair of photons – but in the LHC, pairs of photons are flying around all over the place. Quark-antiquark collisions, for example, produce photon pairs, and there’s lots more such events than there are Higgs decays.

The “signature” that distinguishes a Higgs event from a quark collision is this: the Higgs converts all of its mass – obeying e=mc2 – into energy in the form of the photons; and the colliding quarks have much lower mass.

That energy conversion (at the very high mass) is what gives the photon pairs the right signature for a Higgs decay rather than a quark collision.

The first thing CERN will work on will be confirmation. If the new results are right, then Gianotti said the LHC should be able to deliver a “solid signal” by next summer. That will then give way to work cataloging other aspects of the critter.

The two-photon interaction maybe measured today isn’t the only Higgs interaction possible. If the Higgs really is a 125 GeV creature, then what that will give CERN is the right place to start observing the rest of its predicted properties.

The campaign to measure its other properties would use instruments “sensitive to many decay modes of the Higgs boson – into two photons, four electrons, two leptons/neutrinos, two B quarks, and so on”.

But what is it for?

To even the layperson, the utility of “easy” particles is easy to grasp: electrons give us power and the computer age; photons look like coming into their own in a nascent photonic age.

The Register asked Balazs whether the Higgs boson, once catalogued and characterized, would provide new modalities – pragmatic applications in which our knowledge is, as with the electron, used to manipulate the universe around us.

“Yes,” he said. “The long answer, however, is that I can’t tell you what that will be.”

Balazs reminded The Register that electricity had a long life around experimenters before it became “useful”, however.

“I can’t tell you what new things will come out of the completion of the Standard Model, but they will be amazing.” ®

Bootnote: I should insert my usual disclaimer here. I've tried to provide relatively lay information accurately, but I'm not a physicist. My thanks to Associate Professor Balazs for trying to set me straight, and my mistakes are my own. ®