I have you now! Top 10 Star Wars Xmas presents

With the shops jammed and checkout lines up the wazoo, it would be forgivable to buy Star Wars: The Complete Saga on Blu-ray from Amazon for The Wars fan in your life, and think "job done".

The Reg, however, has channeled The Force to show there is another way, with 10 of the best Star Wars gifts. From the Millennium Falcon, Owners' Workshop Manual to a limited edition R2-D2 Xbox 360 and more, from the metro to the mainstream, strap in...

Since they debuted in 1960, Haynes Publishing's hard-backed car manuals have become as much as a garage institution as grease under the fingernails and the smell of WD-40. With its latest manual, Millennium Falcon, Owners' Workshop Manual, Haynes reaches beyond the transmission jockeys of Earth to the space cowboys of Star Wars. 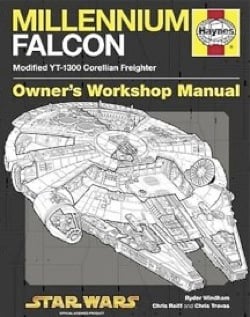 The Millennium Falcon, Owners' Workshop Manual wears Haynes auto-heritage on it's sleeve: you get vital stats, owners' history, modification options, handling and performance characteristics, and plenty of photos, illustrations and cutaway diagrams of important things such as the cockpit, engines and guns all with a handy numeric key.

In Episode IV when farm-boy Luke calls the Falcon a piece of junk Solo cuts him off with: "I made a lot of special modifications myself." Solo's not just spilling hot plasma, and Haynes explains two of Solo's hottest but highly illegal modifications to the ship he took from fellow rogue Lando Calrissian. Solo made the Falcon able to out-run and out-gun the Empire. No wonder they resorted to trickery to disable her. If, like Solo, you find yourself stuck on some frozen ice cube with a malfunctioning hyper drive and Imperial ships closing in, then this Haynes guide could be the thing that saves your cowboy arse.

When he's not suffering the indignities of being barred from the Mos Eisley Space Cantina or the endless put downs of C-3P0, R2-D2 is coming to the rescue of his human companions or lending Luke a sympathetic beep from the backseat of his X-wing deep in space. How in the cosmos Obi Wan can't remember owning this plucky and resourceful little 'droid we'll never know. 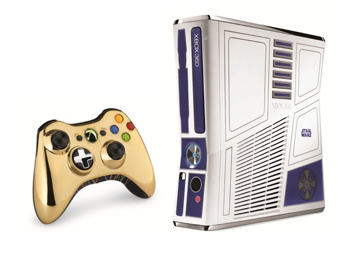 Thanks to Microsoft, however, you can now possess your own R2-D2 style Xbox unit: Microsoft's Star-Wars themed Xbox 360 bundle has given a 320GB Xbox console a blue-and-white panelled paint job and the ability to make R2-style noises. The pack includes a C-3P0 gold handset, and a Kinect controller and Kinect Star-Wars game to refine your hands-free Jedi skills. This is the console you were looking for.