Selective Layer Sintering (SLS) is a CAD-heavy process which demands absolute design precision before you fire up the printer - an impressively expensive bit of German kit (even more impressive in threes, as seen below) - which hews your creation from a living mass of nylon powder, to leave a precise solid representation of what you dreamt up on the computer screen. 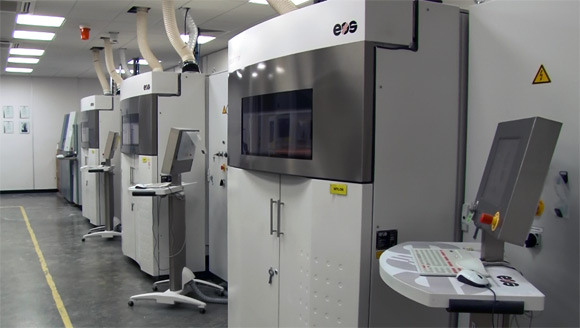 The advantage of all the up-front graft on the PC is that once you've got your CAD sorted it takes just a couple of days to go from this... 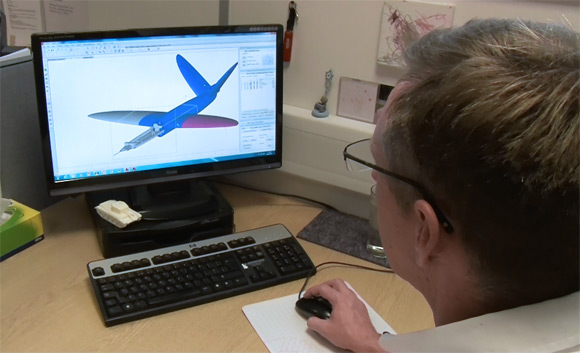 We'll have more on SLS and 3T RPD - which printed the Sulsa aircraft - in due course. In the meantime, here's some vid of Southampton's plane, courtesy of New Scientist

Keep watching the skies for news of the progress of the Vulture 2, and any science graduates out there who're inspired by Southampton University's work might like to check out this prospectus for its MSc in Unmanned Vehicle Systems Design. ®

Our Vulture 2 design team in full...

Joshua Jeeson Daniel: Studied for a BEng at the University of Southampton specialising in Aerodynamics and Propulsion. My previous undergraduate projects have included, "RANS study of co-axially and laterally strained wall bounded turbulence" and "Study on morphing wing technology". Currently I am taking a PhD at the University of Southampton looking at "Linked data and Semantic data mining" to support Rolls-Royce plc in engine unit cost prediction.

Christopher Dodd: Studied for a MEng at the University of Southampton specialising in Aerodynamics and Propulsion. My previous undergraduate projects have included, "an experimental analysis of the flapping dynamics of a flag" and "design, build and fly of a partially 3D printed UAV". Currently I am studying an EngD (Engineering Doctorate) at examining design and cost optimisation of turbo fan components. The project is funded through Rolls-Royce, the Technology Strategy Board (TSB), and the Engineering and Physical Sciences Research Council (EPSRC).

Siddhartha Santos: Aircraft technician (Airbus 320 and Eurocopter Ecureuil AS350). Graduated with a BEng in Spacecraft Engineering at the University of Southampton. Recent publications include "Development of morphing deployable for space applications" – 3rd year undergraduate project presented at the 61st International Astronautical Congress, Prague – and "Characterizing the convergence of a stochastic simulation model using the bootstrap method" – presented at the 19th Advances in Risk and Reliability Technologies Symposium, Stratford-upon-Avon. Currently in 2nd year of an Engineering Doctorate in the area of gas turbine life cycle cost modelling. The project is funded by Rolls-Royce, the Technology Strategy Board (TSB), and the Engineering and Physical Sciences Research Council (EPSRC).

Jeroen van Schaik: A mechanical engineer now working as a PhD student at the University of Southampton in the context of the DECODE (Decision Environment for COmplex DEsign) project, working on the design and optimization of UAVs for search and rescue tasks. His primary research interests are additive manufacturing, UAV design, and Design Decision support systems.

Amrith Surendra: Graduated from Southampton University with a MEng in Aeronautical Engineering, specialising in Aerodynamics and Propulsion. As an undergraduate I have undertaken several internships within the Aerodynamics and Flight Mechanics department within the University. In addition to my summer placements I have also worked on several group design projects. My final year project involved the design of a fast response Unmanned Aerial Vehicle. Currently I am studying an EngD (Engineering Doctorate) looking at Value Driven Design of Unmanned Aerial Vehicles. This project is funded by Rolls-Royce and the Engineering and Physical Sciences Research Council (EPSRC).

Not one of the 12 steps: Rehab patients' details exposed in publicly visible database