Nearest supernova since 1986 blasts boffin off her chair

'We're all made out of bits of exploding star, you know'

Boffins across the world have united to study a young supernova just 21 million light years away, to help figure out more about the way that various chemical elements - including those making up our own bodies - are formed. 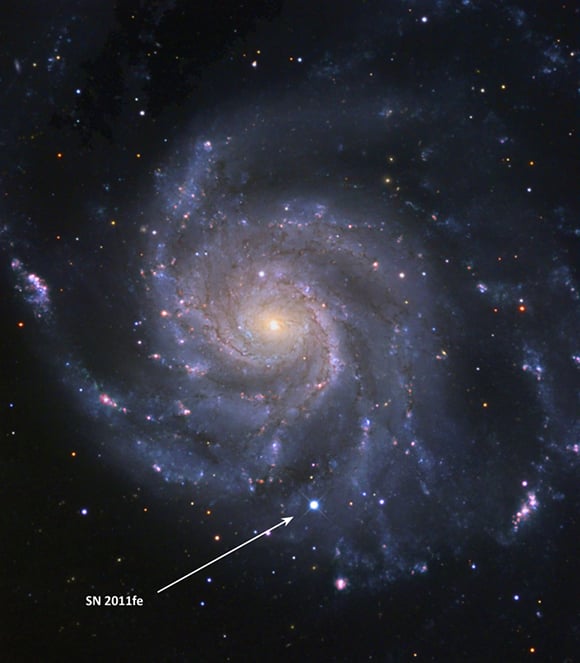 The Palomar Transient Factory caught SN 2011fe in the Pinwheel Galaxy in the vicinity of the Big Dipper on 24 August, 2011. Credit: B J Fulton, Las Cumbres Observatory Global Telescope Network

SN2011fe, the supernova in question, was picked up at the Palomar Transient Factory (PTF), a fully-automated, wide-field survey, just 11 hours after the light of its explosion began to reach Earth, and was shortly confirmed as a Type Ia supernova.

What's interesting about that is that Type Ia supernovae were the ones used in the 90s to calculate the expansion of the universe, and they're also used in the search for dark matter.

The supernova, located in the Pinwheel Galaxy next to the Big Dipper, was the nearest to Earth since 1986, giving the star-gazing researchers ringside seats for the early aftermath of the event - and all the scientific data it could yield.

"When we saw SN2011fe, I fell off my chair,” Mansi Kasliwal of the California Institute of Technology said.

“Its brightness was too faint to be a supernova and too bright to be nova. Only follow-up observations in the next few hours revealed that this was actually an exceptionally young Type Ia supernova.”

One of the many telescopes used to study the supernova picked up the intermediate-mass elements that were spewing out of the expanding fireball, including ionised oxygen, magnesium, silicon, calcium and iron - some of the building blocks for galaxies, and for life itself. Most of these were travelling at 16,000km/s, but some of the oxygen was speeding out at over 20,000km/s.

"Understanding how these giant explosions create and mix materials is important because supernovae are where we get most of the elements that make up the Earth and even our own bodies - for instance, these supernovae are a major source of iron in the universe. So we are all made of bits of exploding stars," said Mark Sullivan of Oxford University.

Watching the supernova also allowed the space boffins to confirm the leading theory on how this kind of event happens.

Scientists had already posited that Type Ia supernovas were caused by a very dense, small white-dwarf star made of carbon and oxygen in orbit around another star.

The white dwarf picks up additional materials from the companion star, but it can only grow to a certain size before it can no longer support itself against gravitational collapse.

"As it approaches the limit, conditions are met in the centre so that the white dwarf detonates in a colossal thermonuclear explosion, which converts the carbon and oxygen to heavier elements including nickel,” said Peter Nugent of Berkeley Lab.

“A shock wave rips through it and ejects the material in a bright expanding photosphere. Much of the brightness comes from the heat of the radioactive nickel as it decays to cobalt.”

The observations also established that the white dwarf's companion star was a main sequence star, not another white dwarf or a red giant.

"If there was a giant companion star orbiting nearby, we should have seen some fireworks when the debris from the supernova crashed into it," said Daniel Kasen of the University of California, Berkeley. "Because we didn’t observe any bright flashes like that, we determined that the companion star could not have been much bigger than our sun.”

The study of SN2011fe was published today in Nature. ®