For those of you who've ever wondered, like you do, whether the Jedi lightsabre or the Taser is the more effective weapon, we're delighted to report that the electric dispenser of justice is no match for Obi-Wan Kenobi's mighty glowing tool. 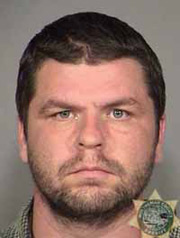 For proof, look no further than the case of David A. Canterbury (pictured), who earlier this week went on the rampage at a Portland Toys R Us store, assaulting three customers with a plastic replica of the Jedi weapon.

Cue swift intervention by law enforcement operatives, who found 33-year-old Canterbury wandering in the parking lot, "talking incoherently", and still swinging his Star Wars stick of merchandise in a manner evidently threatening a severe disruption to the balance of The Force.

A shaken Sgt. Pete Simpson recounted that a first attempt to deploy a taser failed when the device malfunctioned. A second blast ended similarly when Canterbury simply used his lightsabre to snap one of the wires connecting him with the high-voltage law-enforcer.

In the end, cops were obliged to wrestle the perp to the ground as he "struggled violently and continued to shout nonsense". This latter observation confirms El Reg suspicions that Canterbury really is a disciple of the Church of Jedi.

Canterbury is currently languishing in jail pending a "mental evaluation". If Han Solo fails to swoop down in the Millennium Falcon in a timely intervention and whisk the prisoner to a planet outside Oregon's jurisdiction, he faces the beak on 11 January on "three counts of fourth-degree assault, second-degree disorderly conduct, third-degree theft, resisting arrest and interfering with a police officer" raps. ®