Oracle claims a world-record TPC-C result with its database running on a Cisco server and not an Exadata system, although doesn't mention that two Violin memory flash arrays were needed.

This was the third lowest cost-per-tpmC ever, only being beaten by the $0.49/tpmC and $0.51/tpmC of two four-processor HP Proliant systems running SQL Server. The $0.51/tpmC result used six Violin Memory V3200 flash arrays, each with with 2.6TB of flash.

Oracle says its tech "delivered more performance, and cost nearly 11 per cent less per tpmC than the nearest competition on a configuration using identical Intel processors and memory capacity", referring to an HP result of 1,024,380 tpmC and $0.65/tpmC with a ProLiant DL380. This server featured 81 400GB SSDs plus 104 disk drives.

Both Cisco's and Oracle's canned quotes somehow forgot to mention the Violin arrays, which was somewhat surprising as the Violin storage represented the vast majority of the $602,316 bill for the tested configuration. 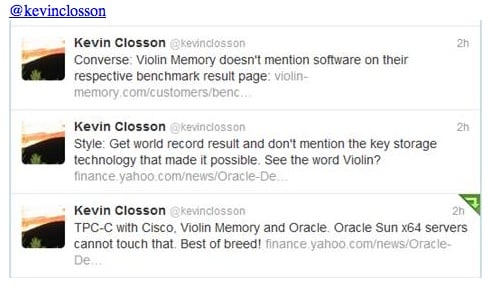 Kevin Closson, a technology director and performance architect in the Data Computing Division of EMC, tweeted about the result, saying: "Style: Get world record result and don't mention key storage technology that made it possible. See the word Violin?"

He also said that Violin doesn't mention Oracle on its benchmark result page, which is not quite true; the Violin page has a hot-link to the Cisco UCS tpmC result which does mention Oracle. ®