A lot of fibre is mangled by metal pilferers, you know

BT is working with Scotland Yard in an effort to crack down on metal theft, which the Met said costs taxpayers £700m per year - not to mention the misery when power and telecoms cabling is nicked.

A group – dubbed the Waste and Metal Task Force – has been formed, made up of the Metropolitan Police Service; representatives from BT; and members of the environmental crime unit at Bexley council, which has a large number of scrap metal dealers.

“Metal theft is not a victimless crime but is causing increasing misery to commuters and householders, and costing millions to the rail industry and local authorities," said Chief Superintendent David Chinchen, who led Scotland Yard's Operation Ferrous, which is the Met's investigation into metal theft.

“Our latest operation aimed to identify, disrupt and deter those involved in this illegal trade, and acted as an important intelligence-gathering exercise for future operations so that we can target those evading the law and those who supply them even more effectively," he added.

“We are keen to work with legitimate scrap metal dealers, but those who aren’t can expect to see regular enforcement. These crimes are covered by a complex range of laws, thus a multi-pronged approach is essential in order to tackle it robustly and we are already working closely with our partner agencies. 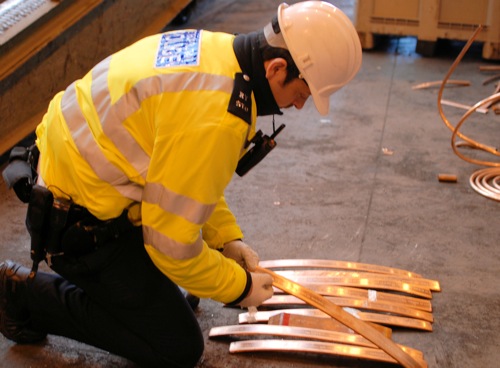 “Our officers will employ a wide range of robust tactics and we plan to run regular operations to crack down on those seeking to profit, and who end disrupting others’ lives and putting their own at risk.”

The investigation uncovered £16,000-worth of BT cable and copper earthing straps stolen from a National Grid sub-station in Bexley borough alone.

Scotland Yard said that one of the illegal tricks employed by metal thieves involved setting up around a manhole cover while wearing fake BT vests and carrying false BT passes. The Met added that this is clearly a shady affair, however, as BT always hires sub-contractors to recover the national telco's underground cable.

"In September 2011, four men were arrested in Lambeth using two bogus BT trucks, a BT van and a winch to steal underground cable," the Met said. "The same team are believed to be responsible for cable cuts across London and Essex in recent months."

The Yard added that a single piece of copper cable nicked from an underground telephone network could knock out the landlines to more than 200 homes and businesses for up to three days at a time.

Fibre-optic cable is often damaged by thieves who try to get their hands on copper, which typically uses the same infrastructure. However, fibre is worthless to criminals. ®