It beat EMC to the hike

We thought EMC was the first major enterprise supplier to raise disk drive prices after the Thailand floods. Not so. HP sent out a letter - pictured here - last month saying it was being forced to increase prices as a result of the hard drive shortage caused by the deadly floods in Thailand. Many of the country's disk assembling factories were inundated or destroyed by the rising waters, forcing up prices as the number of drives shipped in the last quarter fell well below expected targets. 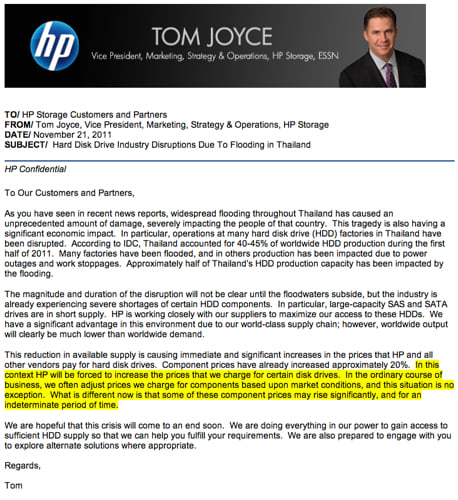 Here are the key extracts from the letter by Tom Joyce, VP for marketing, strategy and operations in HP Storage:

The magnitude and duration of the disruption will not be clear until the floodwaters subside, but the industry is already experiencing severe shortages of certain HDD components. In particular, large-capacity SAS and SATA drives are in short supply. HP is working closely with our suppliers to maximize our access to these HDDs. We have a significant advantage in this environment due to our world-class supply chain; however, worldwide output will clearly be much lower than worldwide demand.

This reduction in available supply is causing immediate and significant increases in the prices that HP and all other vendors pay for hard disk drives. Component prices have already increased approximately 20%. In this context HP will be forced to increase the prices that we charge for certain disk drives.

We are hopeful that this crisis will come to an end soon. We are doing everything in our power to gain access to sufficient HDD supply so that we can help you fulfill your requirements. We are also prepared to engage with you to explore alternate solutions where appropriate.

Given that both HP and EMC are talking about raising prices for disk drives we can assume that all the major server and storage array vendors will do the same. ®