Our world may actually survive flame-grilling by dying sun

Earth may survive longer than we expect - scientists have stumbled across two deep-fried planets orbiting the glowing embers of a dying star.

The two flame-grilled planets, dubbed KOI 55.01 and KOI 55.02, are slightly smaller than the Earth and have been spotted in a very tight orbit around a subdwarf B star - one that has largely exhausted its fuel during a period of rapid expansion and is now collapsing in on itself. The planets would have been completely enclosed by the expanding star but have survived the experience, although they will have lost a lot of their mass and – almost certainly – any form of life had it existed.

Astronomers expect the Earth’s sun to go through a similar process in about five billion years time, and have predicted that Mercury, Venus, Earth and Mars would be consumed in the conflagration. However, the fate of the newly discovered planets suggests it may not be that simple, since the mass of the planet may have an effect on the life of the star. 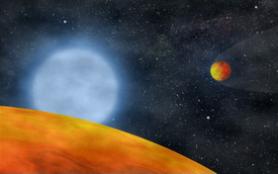 "As the star puffs up and engulfs the planet, the planet has to plow through the star's hot atmosphere and that causes friction, sending it spiralling toward the star," said Elizabeth ‘Betsy’ Green, an associate astronomer at the University of Arizona’s Steward Observatory.

"As it's doing that, it helps strip atmosphere off the star. At the same time, the friction with the star's envelope also strips the gaseous and liquid layers off the planet, leaving behind only some part of the solid core, scorched but still there."

The discovery of the planets was made by accident, since the researchers were primarily examining the pulsation rate of stars, using data from the Kitt Peak Earth observatory in Arizona and the NASA's Kepler Space Telescope. The team observed two tiny periodic modulations in the star’s pulsation and deduced the planet’s existence and history.

“We know of a brown dwarf that possibly did that, but that's not a planet, and of giants planets around subdwarf B stars, but those are too far away to have had any impact on the evolution of the star itself." ®