AMD has unveiled its first graphics card based on its Graphics Core Next architecture, which The Reg told you about in excruciating detail this summer. According to AMD, the card – the Radeon HD 7970 – is also the only GPU to be built using a 28-nanometer process.

"This graphics card represents a revolution in the graphics industry," crowed AMD GPU honcho Matt Skynner in AMD's announcement. "To put it bluntly, at 28nm the AMD Radeon HD 7970 changes everything!"

What that stack of acronyms adds up to – in theory, at least, since we haven't yet got our hands on a GCN-based GPU – is a chip that not only provides a hefty dose of graphics power, but also lends itself to the CPU-cum-GPU cooperative processing known as "heterogeneous computing", in which chunks of tasks are assigned to compute or graphics cores depending upon which can handle them most efficiently. 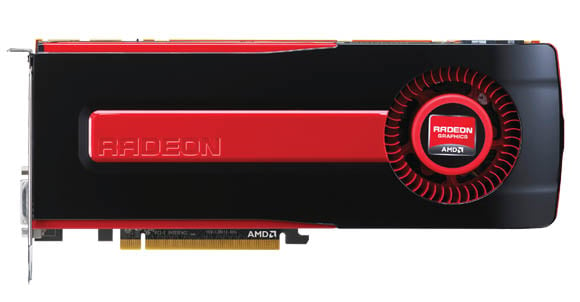 With the introduction of the HD 7970, AMD also rolled out a new metric – at least new to you humble Reg reporter – saying that the 28nm part provides "an improvement of over 150 per cent in performance/sq mm over the prior generation."

The HD 7970 also support an assortment of AMD-branded enhancements, including:

As you've come to expect from AMD's graphics offerings, the HD 7970 supports DirectX 11, DirectCompute, and OpenCL. Also supported are DisplayPort 1.2 and HDMI 1.4a, and Discrete Digital Multi-Point (DDM) audio to run multiple independent audio streams over those connections.

On paper – and from what we learned about AMD's Graphics Core Next at this summer's Fusion Developer Summit – the Radeon HD 7970 looks like a threat to Nvidia's claim that their GeForce GTX 580 is "the world's fastest DirectX 11 GPU."

When the HD 7970 becomes available on January 9 "from retailers worldwide", it'll run you a cool $549, list price.