Open ... and Shut The wheat is increasingly being separated from the chaff in mobile. Unfortunately, what's not clear yet is which is the wheat, and which is the chaff. In the ongoing war between Apple's iOS and Google's Android, both camps have plenty to cheer about - and to moan about.

Just take a look at recent headlines. In my own news feed, both Apple and Google have cause to declare victory: 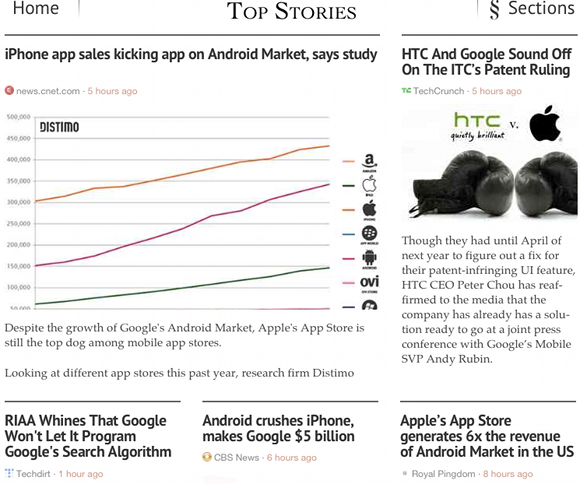 On one hand, Erik Sherman figures that Android's 700,000 daily activations adds up to $5bn per year in user revenue for Google, despite giving away the Android to one and all for free. Apple, meanwhile, doesn't break out iOS revenue but its mobile business has been exploding quarter after quarter, which is made even better by the Distimo finding that the App Store revenue is six times that of Android Market.

Before you answer, there's an open question as to whether Apple's App Store business model has much of a shelf life.

For example, Dave Winter writes that apps are doomed to fail over the medium to long term because they don't link. The web does. We live in a social world, one that has grown beyond the silo'd confines of apps on the desktop. It's a world that Winter, Mark Suster (who wrote a great argument on the importance of HTML5 here), and others believe must ultimately crown the web victor on mobile devices, just as it on the desktop.

Yes, we still use productivity apps that run native code. Yes, developers tend to use native apps, too.

But look to the future, and it's web all the way down. According to a 2009 study by the Kaiser Foundation, youth aged eight to 18 spend more than seven-and-a-half hours every day on different devices, much of it online, and most of those devices mobile. They're not growing up with Microsoft Office. They're growing up with Facebook, with texting.

And, yes, today they're growing up with mobile apps, but look under the covers and you'll see that these are not your father's apps, nor even Apple's. Take Facebook. Facebook engineering manager Dave Fetterman delivered an increasingly canonical speech among Silicon Valley app developers, in which he argues that in order to keep up a frenetic pace of development across disparate devices the company had to build its mobile apps using HTML5 technology. The company then wraps this web code with native code to optimise performance, but the intent (and practice) is to decreasingly rely on native code as mobile web performance improves.

Anyone using the Facebook iPhone app over the past few months, for example, will have noticed Facebook updating the app to get this balance between web and native right. It will continue to do so, just as LinkedIn, Netflix, and other technology giants are. The rest of the industry will follow, and we'll see "apps" blur into the web, because that's the only way to develop apps that can scale across devices and users in an increasingly mobile world.

So Apple is dead, right? Well, maybe not.

After all, Apple is also - thanks to Steve Jobs - the industry's biggest proponent of HTML5. Yes, that's right: the king of native apps is also the company that best supports HTML5 on its various devices. Not Google. Not Microsoft, though Microsoft comes closer than Google. But Apple.

In Apple's world, the money is in the hardware, so whether someone opts to use native or web code, Apple still wants them to be buying iDevices. And to pay a premium for them.

In short, there's no clear way to call a winner in mobile today. Much depends on what constitutes winning. Profitability? That battle goes to Apple. Market share? Google.

About the only battle I feel comfortable calling at this point is between consumers and vendors. The more vendors try to battle each other through lawsuits, the more consumers will lose in the form of reduced innovation coming to market and higher prices stemming from decreased competition. But some can probably spin this as a victory.

Matt Asay is senior vice president of business development at Nodeable, offering systems management for managing and analyzing cloud-based data. He was formerly SVP of biz dev at HTML5 start-up Strobe and chief operating officer of Ubuntu commercial operation Canonical. With more than a decade spent in open source, Asay served as Alfresco's general manager for the Americas and vice president of business development, and he helped put Novell on its open source track. Asay is an emeritus board member of the Open Source Initiative (OSI). His column, Open...and Shut, appears three times a week on The Register.