Could you repair and tweak superstar physicist Stephen Hawking's robot voice box and gadget-laden wheelchair? If you reckon yes, then the celebrated author and cosmologist wants to hear from you.

He has a technical assistant job going, with a modest graduate salary, and it involves maintaining the electronic systems that allow him to speak in public and meet others in the rock'n'roll globetrotting world of physics.

Ironically, the position involves working for one of the University of Cambridge's top theoretical scientists yet performing rather practical tasks. If chalkboards and equations are your game because tangled wires and humming circuits scare you off, then this probably isn't the career path for you.

It's implied that Prof Hawking's go-go-gadget wheelchair isn't well documented and, as you can see from the picture below, rather ad-hoc. There's no technical support for the gear - whoever gets the job will be the technical support.

The Brief History of Time author has motor neurone disease, which has left him almost completely paralysed, and the black hole probing boffin lost his voice after a tracheotomy operation in the 1980s.

He relies on his souped-up wheelchair to get out and about, and various bits of gear to translate small hand movements into words, spoken in the monotonic robotic voice that - outside the arena of particle physics - he is best-known for. The supercomputer wielding, alien invasion fearing prof also controls things like the lights and doors, TV and other gadgets in his home and office by remote control from his wheelchair. 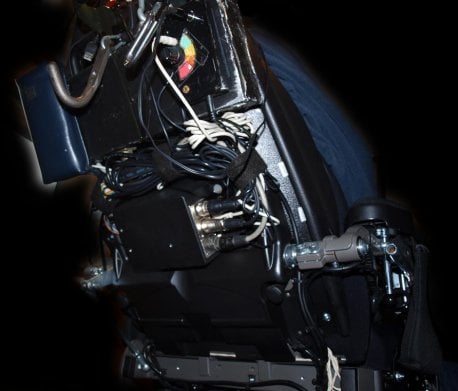 Could you maintain this, asks Prof Hawking Credit: hawking.org.uk/

According to the unconventional job advert: "It is not a PhD or post-doc position for academics looking to study physics, but a purely technical post to allow Prof Hawking to function within the physics community and as a public speaker. The original purpose of this position was to aid Professor Hawking in those areas which he has difficulty due to his disability. The job has since expanded."

Duties include booking travel arrangements for the prof and his entourage (including yourself), developing and fixing his speech systems, repairing his adapted van, help prepare his lectures, fend off journos, maintain his website and deal with the public.

Most importantly, the ideal candidate must be able to work under pressure, maintain "black box" systems with no instruction manual or technical support, be a whiz with computers and electronics, be able to speak to large audiences and show others how to use complex systems.